Parvathy and Roshan Mathew-starrer Varthamanam finally has a release date. Read to know all the details about the movie's cast and characters here.

Parvathy Thiruvothu took to her Instagram story to share the news of the release date for her next movie with Roshan Mathew, Varthamanam. In the video, Parvathy announced that the movie will be releasing on March 12, 2021. She thanked fans for supporting her and the rest of the cast movie for waiting patiently to know the release date. The news was shared three days prior to the release on March 9, 2021.

In the Malayalam movie, Parvathy plays the role of a simple girl, Faiza Sufiya from Kozhikode, who goes to who goes to a university in Delhi with a special purpose. Parvathy's character wishes to research Mohammed Abu Rahiman, a freedom fighter. Roshan Mathew's character plays the role of a student activist in the movie. According to the News Minute, the producer of the movie Aryadan Shoukath, showcases the lives of various college students with opposing views who must learn to co-exist on the campus. 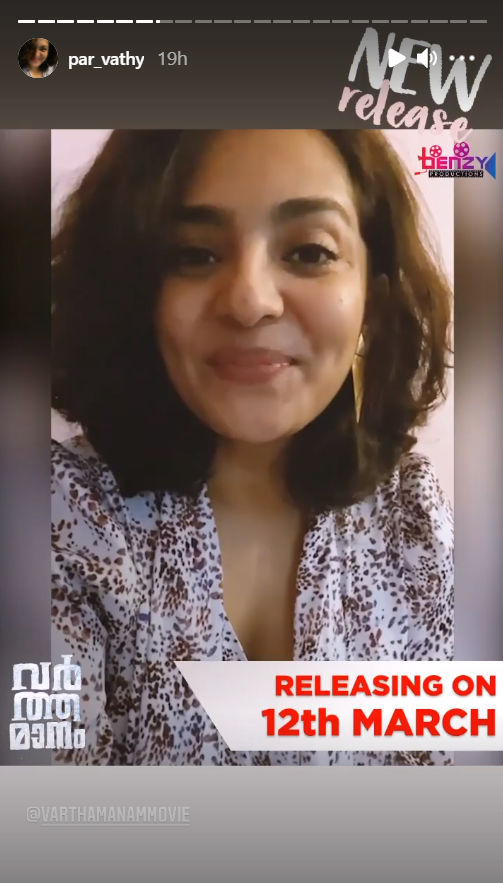 Soon after the announcement, actor Roshan Mathew too took to his Instagram handle to share his excitement for the release of the movie. He cautioned fans about the risk of the pandemic. He also said that if the audience would be careful and safe they should go watch the movie. He also gave a special mention to actors Karan Puri and Niketan Sharma for their support in the filming. The post gained more than 17,000 likes in a span of an hour.

On March 8, 2021, the movie Puzhu was announced on actor Mammootty's page. Mammootty and Parvathy would be seen sharing the silver screen for the first time. Mammootty wished his female followers on the occasion of Women's Day as he gave a glimpse of the poster. The movie will be produced under Dulquer Salmaan's Wayfarer Films and Cyn-Cyl Celluloid.

Another one of Parvathy's movies set to release in 2021 is Aarkkariyam. The movie's release date was announced on March 8, 2021. Aarkkariyam will feature Parvathy, Sharaf U Dheen and Biju Menon in the lead roles. The film is helmed by Sanu John Varughese and will be available in cinemas from April 3, 2021.