Parvati Nair Wishes Thalapathy Vijay On His Birthday, Calls Him 'oxygen For The Industry'

Actor Parvati Nair posted a heartfelt wish for Thalapathy Vijay on his 47th birthday, calling him 'oxygen' of the industry, and praising him for his success. 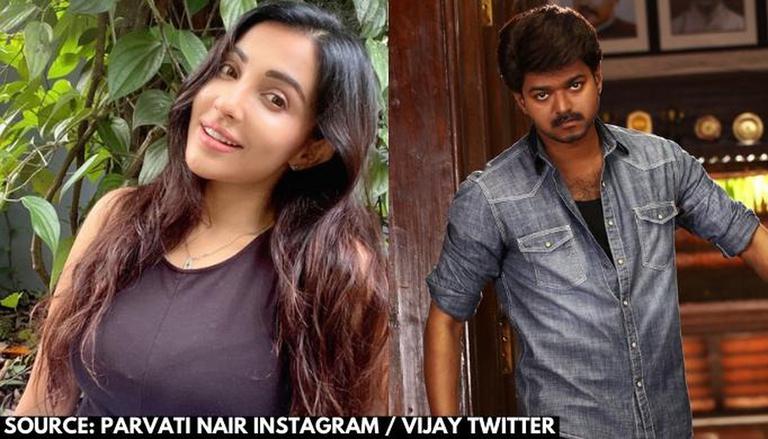 
Actor Parvati Nair, who works prominently in Tamil, Kannada, and Malayalam films, shared a heartfelt birthday for Thalapathy Vijay. Vijay, who celebrates his 47th birthday today, on 22 June, has also received wishes from a lot of other actors and co-stars. Read on to know more about it.

Parvati Nair’s wish on the occasion of Thalapathy Vijay's birthday

Actor Parvati Nair posted a tweet for Thalapathy Vijay, wishing him on his birthday, and wrote a heartfelt message with it. In the message, she mentioned that Thalapathy Vijay is like ‘oxygen’ to the film industry, and praised him for maintaining a huge fanbase for such a long time. Along with the message, she posted the picture of the Beast second look poster. Take a look at Parvati Nair’s tweet here:

Happy Birthday #Thalapathy @actorvijay sir. Thank you for being an oxygen for the industry. Its not easy to gain such a huge fanbase and retain it for decades. Best wishes for lots of #BEAST mode victories 🤗#HappyBirthdayThalapathy #HBDTHALAPATHYVijay #ThalapathyVijay pic.twitter.com/pVz7NimVeG

Beast is Thalapathy Vijay’s upcoming film, which is being directed by Nelson Dilipkumar. The first Beast poster was shared by Thalapathy Vijay on his Twitter, a day before his birthday. Seeing the poster, his fans and followers got excited to see the Master actor in a gun-wielding avatar.

READ | Thalapathy Vijay's birthday: Fans drop wishes for their idol; call him 'the most humble'

The Beast second look poster was unveiled by Vijay on his birthday. Take a look at the picture of the poster that he posted on his Twitter:

Besides Parvati Nair, a lot of other celebrities, actors, and co-stars of Thalapathy Vijay also posted wishes for his birthday on their respective Twitter handles. Some of these celebrities include Master director Lokesh Kanagraj, actor Yogi Babu, Radikaa Sarathkumar, Ramya Subramanian, Kajal Aggarwal, Dhanush, Mohanlal, and Raghava Lawrence.

All you need to know about Beast

Beast is the upcoming action film of Thalapathy Vijay. Its previous title was Thalapathy 65, which was misconstrued by some as ‘Vijay 65.’ The official title ‘Beast' was announced along with the unveiling of its first poster. With Thalapathy Vijay, Beast will also star Pooja Hegde in the lead role, and actors Yogi Babu, Shine Tom Chacko, VTV Ganesh, and Aparna Das will be seen in supporting roles in the film. The music of Beast is being composed by Anirudh Ravichander. The release date of Beast has not yet been announced.