The development came after actor Pawan Kalyan made headlines for his movie-style entry in a village named Ippatam in Andhra Pradesh. 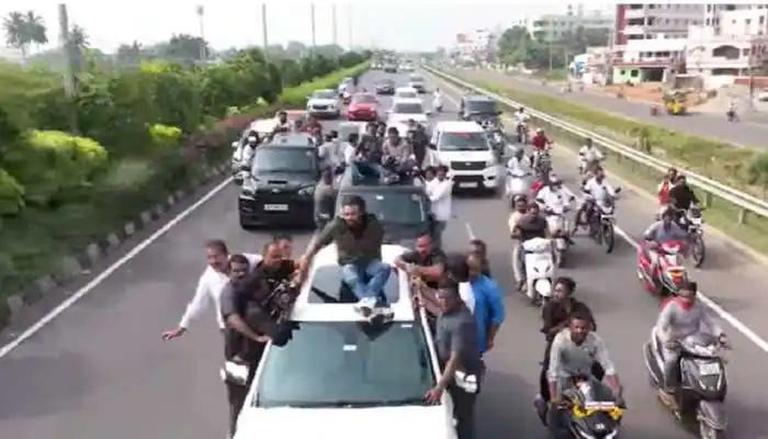 
Days after actor-politician Pawan Kalyan broke the internet with his 'stylish' yet dangerous entry at Ippatam village in Andhra Pradesh’s Guntur village, he has now been booked for rash driving. An FIR has been registered against the Jana Sena Party chief for rash driving and flouting all the road safety rules.

The complaint against Actor Pawan Kalyan was registered after the complainant named P Shiva failed to control his bike and fell down because of the real-life stunt of the actor-turned-politician and his followers on the Ippatam road.

"The incident occurred on November 5, 2022, at 9.30 am at Ippatam road, Tadepalli Mandal in which the accused Pawan Kalyan, President of Jana Sena Party, got seated on the top of a running car. Besides this, his car was followed by so many cars and bikes to Ippatam village. His car drove in a rash and negligent manner at high speed, followed by other vehicles. All of them went to Ippatam village at high speed," the FIR read.

The development came after actor Pawan Kalyan made headlines for his movie-style entry in a village named Ippatam in Andhra Pradesh. Kalyan was seen sitting on top of his car, with his supporters and security persons following his vehicle. The video of the same has gone crazy viral on social media with many netizens slamming the actor for not following traffic rules.

Interestingly, the Jana Sena chief was visiting the Ippatam village to meet locals who lost their homes during demolitions as part of a road-widening drive. The video that is going viral on social media was actually recorded by a drone and was shared by his own Jana Sena Party on YouTube.

The video of Pawan Kalyan traveling in full swag on his car's roof is being shared widely on social media with users reacting in the comments reaction.

What is the message he’s giving to youngster’s?
Who is responsible for those families if anything happens unexpectedly? This is strictly condemnable. A stringent action to be taken in filing a case against him( Film Hero).
Referring to @dgpapofficial

Hmm, Absolutely not a matured act. These kind of actions influence youngsters 🤦🏻