Ram Charan To Jr NTR, Here's How Much The 'RRR' Star Cast Charged For The Magnum Opus

SS Rajamouli's magnum opus 'RRR' is just weeks away from its grand release in January 2022. Take a look at the leading actors' remuneration for the film. 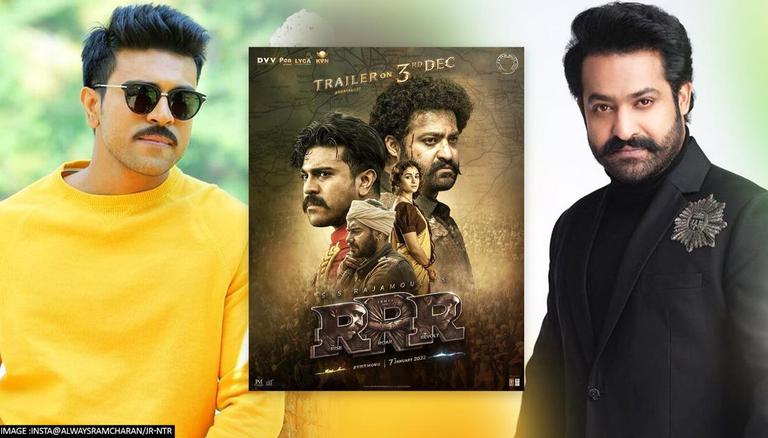 
Fans cant seem to contain their excitement as SS Rajamouli's RRR nears its release date. Makers of the magnum opus have shelved overwhelming sums of money on the project, promotional campaigns as well as the ensemble cast, which includes South superstars Ram Charan and Jr NTR and Bollywood duo Alia Bhatt and Ajay Devgn. If you're wondering how much money the leading cast has minted for their stint in RRR, continue reading.

How much did the ensemble cast of RRR charge for the film?

According to a Bollywood Life report, the stars' pay scale ranges from Rs 9 crores and goes up to a whopping Rs 45 crores. On the other hand, director SS Rajamouli's fee will be a certain share of profit garnered by the film.

The Rangasthalam star, who plays the role of Indian revolutionary Alluri Sitarama Raju has reportedly charged Rs 45 crore for this film.

NTR will also essay the role of a revolutionary leader, Komaram Bheem, who rebelled against the Nizam of Hyderabad. One of the highest-paid actors in the country, the actor's remuneration for RRR is Rs 45 crore.

The Singham star will be seen in an extended cameo appearance in the magnum opus. The actor has reportedly been given Rs 25 crore for the film.

Alia will be gracing the film in the role of Sita, for which she has garnered a remuneration of Rs 9 crore.

Lastly, director SS Rajamouli will take away a 30 per cent profit share from the film.

The period drama charts the story of two freedom fighters in the 1920s who braved the British together in the pre-Independence era. The fictional retelling narrates how a British governor captured a girl, with Komaram Bheem turning a 'protector' for her. Alluri Sitarama Raju is then deployed by the British to catch hold of Bheem. The duo further develops a beautiful friendship and promises to give it all for their bond. Apart from the aforementioned stars, RRR also stars Spandan Chaturvedi as Young Sita, Olivia Morris as Jennifer, Alison Doody as Lady Scott, Ray Stevenson as Scott, Shriya Saran as Sarojini.

(Disclaimer-The above information about the actors' remuneration has been sourced from another media report. The website does not guarantee a 100% accuracy of the figures.)