Ahead of director SS Rajamouli’s upcoming film RRR, the makers had conducted a pre-release event in Mumbai with the entire cast in attendance. 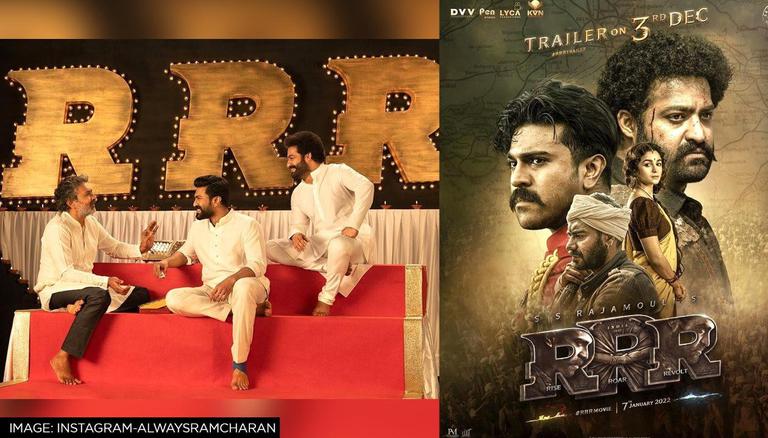 
Ahead of director SS Rajamouli’s upcoming film RRR release, the makers had conducted a pre-release event in Mumbai with the entire cast in attendance. During the pre-release event of the film in Mumbai, director SS Rajamouli gave everyone a glimpse of Jr NTR and Ram Charan's introduction scenes. The Baahubali director also spoke about working with the two stars and the differences in their acting styles.

The director during the event, spoke about the introduction scenes of Jr NTR and Ram Charan in the forthcoming film RRR. Calling Charan and Tarak (Jr NTR) his Ram and Bheem, he said, "They are part of my family. We had earlier worked on superhit films and it was their stardom that made me a star director. Charan is a fantastic actor and he doesn't know it. Tarak is also a fantastic actor, but he knows it."

Speaking about their introduction scenes in RRR, Rajamouli said, "I troubled them so much. For Tarak's introduction scene, we made him run in a jungle in Bulgaria without chappals. He ran like a tiger. Similarly, for Charan, we pushed him in the middle of 2000 people. There was sweat, dust, and blood. It is one of the best scenes I have shot in my career."

Earlier, Ram Charan took to Instagram and shared a backstage picture with co-actor Jr NTR while waiting for the promotional event. Charan and Jr NTR essay the roles of Alluri Sitarama Raju and Komaram Bheem respectively, who were activists of Hyderabad and Andhra Pradesh in the pre-Independence period.

READ | 'RRR': Jr NTR dubs in Hindi in his own voice for first time for SS Rajamouli's magnum opus

Ahead of its release, the film's songs were featured on Times Square in the USA. The official Instagram handle of RRR recently gave a glimpse of this grand tribute via a video. The clip depicted how the official poster of the film is flashing on Times Square with one of the songs being played in the background. The video also depicted an announcement stating the music of the film was out and can be enjoyed on the streaming platform, Spotify. Also starring Olivia Morris as Jennifer, Alison Doody as Lady Scott, Ray Stevenson as Scott, Shriya Saran as Sarojini among others, RRR will release on January 7, 2022.