SS Rajamouli will join the American comedian on his show as a guest on January 9 (US time). 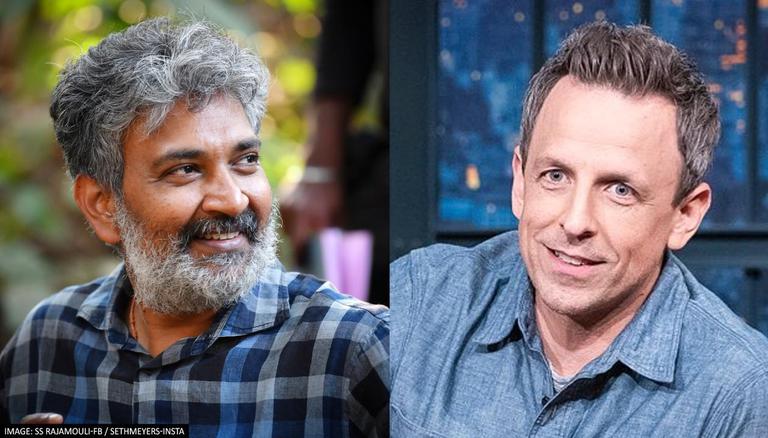 
SS Rajamouli, director of the international blockbuster ‘RRR', will be making his US talk show debut by appearing on 'Late Night with Seth Meyers'. The ‘Baahubali’ director will join the American comedian on his show as a guest on January 9 (US time).

Amid the global success of his film featuring Ram Charan, Jr NTR, Ajay Devgn and Alia Bhatt, Rajamouli has been promoting 'RRR' in the US. The talk show is a stop before the filmmaker heads to Golden Globes on January 10, while his film awaits Oscar nominations later this month.

Rajamouli’s appearance on ‘Late Night with Seth Meyers’ was confirmed on Twitter by film critic J Hurtado, who has helped screen 'RRR' at several theatres in North America. He tweeted, "Can't make it to the @ChineseTheatres screening of #RRRMovie tomorrow? Don't worry, #SSRajamouli will be guesting on @LateNightSeth so you can still get your SSR fix! Someone record it for us!" Reacting to the news, one Indian fan commented, "Unbelievable! (red heart emoji) The whole US will know about RRR."

Can't make it to the @ChineseTheatres screening of #RRRMovie tomorrow? Don't worry, #SSRajamouli will be guesting on @LateNightSeth so you can still get your SSR fix! Someone record it for us! pic.twitter.com/ZDcUl1Gn94

Recently on January 5, SS Rajamouli won the Best Director award at the New York Film Critics Circle (NYFCC) for 'RRR'. The director arrived at the annual gala awards dinner that took place in New York, US with his wife Rama Rajamouli, son and his extended family.

SS Rajamouli and his family, who are currently in the US, will also be attending the 80th Golden Globe Awards ceremony in Los Angeles on January 10. Two stars of the pan-India epic movie - Ram Charan and Jr NTR, will be joining the filmmaker at the Golden Globes 2023.

'RRR' has been nominated at the Golden Globe Awards in two categories - Best Foreign Film and Best Original Song for 'Naatu Naatu'.

'RRR' scored one nod in the 2023 BAFTA Film Awards nominations longlist for the 'Film Not In English Language' category. Meanwhile, Shaunak Sen's 'All That Breathes' was longlisted in the 'Documentary' category.

The fast-paced song 'Naatu Naatu', which features the film's co-leads Ram Charan and Jr NTR, was recently shortlisted for the Oscars in the Best Original Song category. The final nominations for the Oscars will be announced on January 24.

'RRR', which was released globally in Hindi, Tamil, Telugu and Malayalam, submitted itself for consideration in various Oscar categories.