Dulquer Salmaan will be playing the role of a cop named SI Aravind Karunakaran in the action thriller 'Salute', which also stars Diana Penty in a lead role. 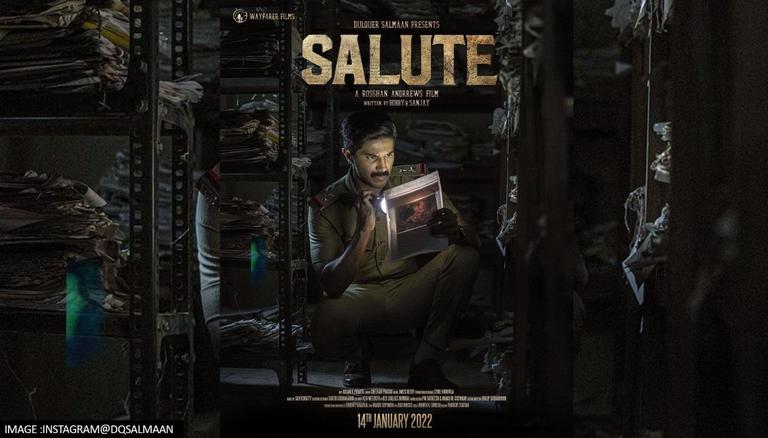 
Shortly after unveiling his first look from Hey Sinamika, Dulquer Salmaan has treated fans with another avatar from his cop-drama Salute, while also revealing its release date. The actor looks every bit intriguing as a no-nonsense vigilante in the latest poster from the film, which will hit theatres on January 14, 2022.

Helmed by  Rosshan Andrrews, Salmaan is also bankrolling the project under his banner Wayfarer Films. It also stars Diana Penty as the female lead, while actors like Manoj K. Jayan, Saniya Iyappan, Lakshmi Gopalaswamy, Saikumar among others will helm other pivotal roles.

Taking to his Instagram handle on Wednesday, December 22, the Kurup star revealed the release date and shared the latest poster where he can be seen in a police uniform scouring some documents. For the caption, he wrote, "Another one ! Aravind Karunakaran is on a mission!! Salute…releasing in theatres worldwide on January 14, 2022. @salutemovieonline." Take a look.

On the occasion of his 35th birthday in July this year, Salmaan revealed intriguing posters from the film while announcing that its shoot had been wrapped up. "We just wrapped up the shoot and it was such an incredible experience. I can’t wait for you guys to watch it.", he wrote. The actioner will see Dulquer essaying the role of a cop named SI Aravind Karunakaran.

Meanwhile, the actor unveiled his first look as Yaazhan from Hey Sinamika, which also stars Kajal Aggarwal and Aditi Rao Hydari in pivotal roles. Helmed by choreographer Brindha Gopal in her directorial debut, the film reportedly charts the story of a couple, played by Dulquer and Aditi Rao. The film has faced various postponements owing to the COVID-19 lockdown and will finally hit theatres in February 2022. Revealing the poster, the actor wrote, "The wait is over, Presenting the super colourful FIRST LOOK. Yours truly as Yaazhan in #HeySinamika."

Rumours are also rife that Salmaan will be coming back for the sequel of Kurup, which garnered widespread acclaim from critics and audiences alike. The film, which also starred Sobhita Dhulipala, follows the story of a criminal named Sukumara Kurup, who is wanted by the Kerala State Police Department since 1984.