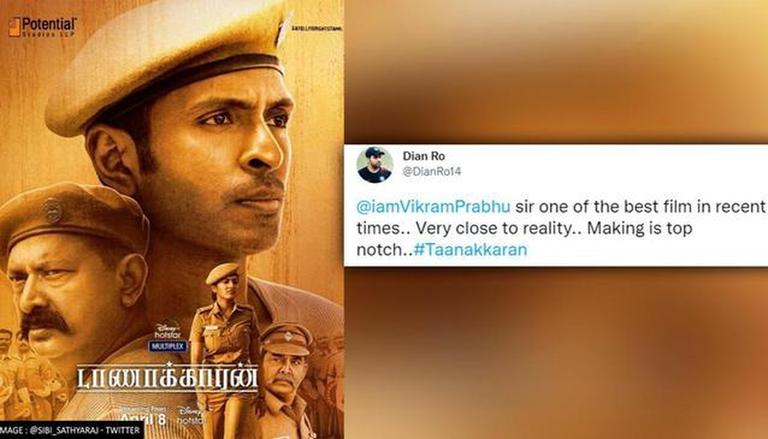 
South stalwart Vikram Prabhu's Tamil film Taanakkaran was released on OTT platform, Disney+ Hotstar on Friday and has been receiving a decent response from the viewers. The film, helmed by Thamizh has been lauded by the fans as hard-hitting, honest, and an eye-opener.

The script and story which is penned by Tamizh are reportedly based on real-life incidents that transpired in 1997. The story revolves around a police recruit school and how the unforgiving system treats its new entrants. Soon after the film was released, fans started hailing Vikram Prabhu’s top-class performance as the cop.

Fans started pouring in their love for the film and Vikram’s character while appreciating the actor’s stupendous acting skills. One of the netizens wrote, “#Taanakkaran A relentlessly intense look into the severe hardships, the unjust politics and the corrupt system one has to endure to become a police officer.” Another excited viewer reviewed the film and wrote, “#Taanakkaran is a realistic, intense and technically brilliant film making, which will surely have an impact on u…” A third user shared stills from the film while hailing the film as Vikram’s ‘career-best performance.’ “#Taanakkaran simply Awesome…@iamVikramPrabhu career-best performance.” Another user echoed similar sentiments and wrote, “#Taanakkaran Good content/Interesting plot well executed…Deserves Huge appreciation.”

#Taanakkaran A relentlessly intense look into the severe hardships, the unjust politics and the corrupt system one has to endure to become a police officer. Driven by a stellar performance from Lal! What a debut from @directortamil77 puts us right there in the middle of it 💥 pic.twitter.com/HJg0lxuUUW

#Taanakkaran is a realistic, intence and technically brilliant film making, which will surely have an impact on u..
Another quality product from @Potential_st 👏👏
Streaming now in @disneyplusHSTam pic.twitter.com/e6VlTKhBCA

The latest release Taanakkaran is bankrolled by SR Prakash Babu, SR Prabhu, P Gopinath and Thanga Prabaharan K under the banner Potential Studios. Notably, the makers of films have earlier produced films like Maya and Monster. The movie also features Anjali Nair, Lal, Bose Venkat, Madhusudhan Rao, and MS Bhaskar in key roles. The music of the film has been given by Ghibran while the editing and photography departments are handled by Gopal Balaji and Madhesh Manickam respectively.

Given the popularity Vikram Prabhu holds down South, through the film, he has delivered the finest performance of his career so far. He is seen playing the role of an ambitious police recruit Arivu.