Actor Tamannaah Bhatia on Thursday took to her social media handle and uploaded a boomerang video to share a sneak peek into her messy room with her Insta fam.


Actor Tamannaah Bhatia, on Thursday, took to the story session of her social media handle and shared a picture to give a sneak peek into her room to her 12.6M Insta fam. Interestingly, the photo captured the glimpse of her bed placed beside the window/balcony of her room. Meanwhile, Tamannaah can be seen in the picture in blue-colour round-neck tee. Keeping the snap captionless, the actor added a GIF figure, in which a woman can be seen with a vacuum cleaner. 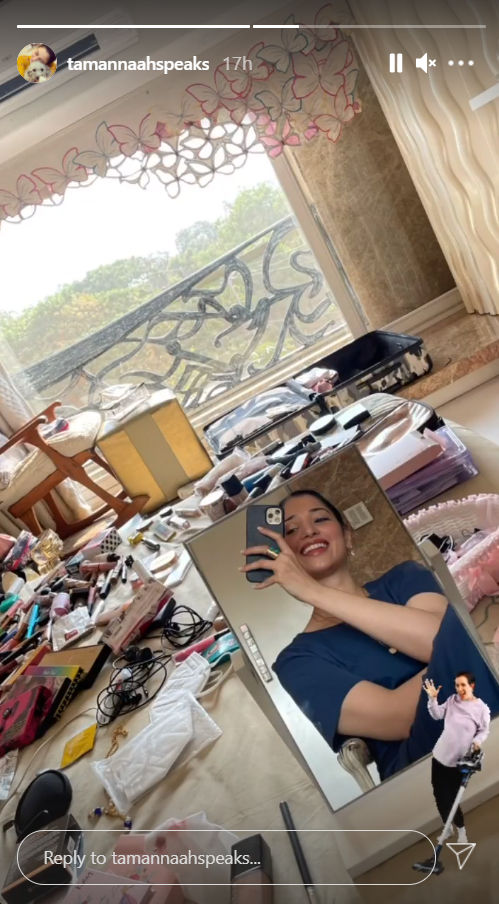 Interestingly, this is not the first time the Entertainment actor has given a peek into her room. In March 2021, she took fans on a virtual tour of her Mumbai house in a new YouTube series for a renowned paint company. In the eight-minute-six-seconds-long video, Bhatia had shared that she lived in the same apartment for almost eight years now. While Tamannaah detailed how her father has decided the décor of the house and her choice of muted colours, the video gave a glimpse of the different corners of her house.

The Bengal Tiger actor is an avid social media user as she keeps her fans and followers updated with her whereabouts. In one of her recent posts, the actor extended wishes for the Tamil New Year, celebrated on the 14th of April this year, along with a quirky video. In the video, she can be seen touching various household items such as a remote, laptop, book, and a cup.

She can be seen staring at the gold objects in bewilderment in the video. Meanwhile, she expressed her shock in the caption writing that everything she touched turned to gold, in Tamil. She continued writing 'is this a dream' and wished her fans on the occasion of Tamil New Year.

On the professional front, the 31-year-old actor, who predominantly appears in Telugu and Tamil cinema, was last seen in Mahesh Babu's Sarileru Neekevvaru. She performed a special dancing number in the film. Meanwhile, her web show, 11th Hour, also started streaming in April 2021. Apart from the mentioned projects, she also has multiple upcoming ventures in her kitty, including Nawazuddin Siddiqui-starrer Bole Chudiyan.