Directed by filmmaker Vinothraj PS, the Tamil drama film, ‘Koozhangal’ (Pebbles) has been selected to be India’s official entry for the Oscars 2022. 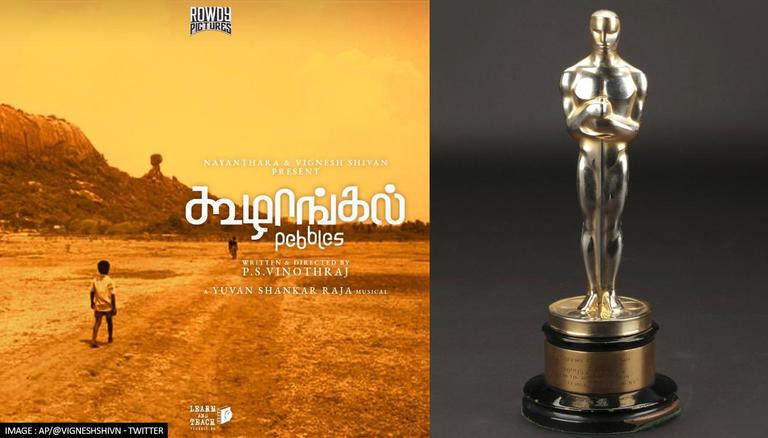 
Tamil drama film, Koozhangal (Pebbles) is all set to take its shot at the 2022 Oscars. Directed by filmmaker Vinothraj PS, the film has been selected to be India’s official entry at Oscars 2022.

The film is all about an alcoholic and abusive husband, whose wife leaves him and runs off after experiencing suffering at his hands. He then takes his young son and sets out to find her and bring her back. The film stars Karuththadaiyaan and Chellapandi in lead roles and was screened at multiple film festivals. Nayanthara and Vignesh Shivan produced the film under the banner of Rowdy Pictures, and the latter took to Twitter to break the good news to the film's fans. He wrote, "There’s a chance to hear this! “And the Oscars goes to …." Two steps away from a dream come true moment in our lives. Can’t be prouder, happier & content" as he shared a picture of the poster of the film.

There’s a chance to hear this!

Vinothraj, the director of the film was ecstatic on hearing the news and replied to the producer's tweet through a retweet. In his tweet, he mentioned that he was grateful for the support and love he has gotten for the film. He wrote, "Could not be happier to receive this news!!! Feeling really grateful for all the love and support!!!".

Could not be more happier to receive this news!!!

This is not the first time the film has a chance to get its hands on a prestigious award. Koozhangal won the top honour, the Tiger Award for best film, at the 50th International Film Festival Rotterdam, earlier this year. The director was over the moon and felt emotional after the news broke. He wrote, "Feeling emotional!!! Pebbles won the Tiger Award 2021. Our Hard work, patience & Dream finally came true. Thank you all for your love and support."

READ | Vidya Balan and Ekta Kapoor among new invitees at The Academy, eligible to vote for Oscars

With input from PTI