Kamal Haasan is currently basking in the success of his film 'Vikram,' in which he took on a key role alongside Vijay Sethupathi and Fahadh Faasil 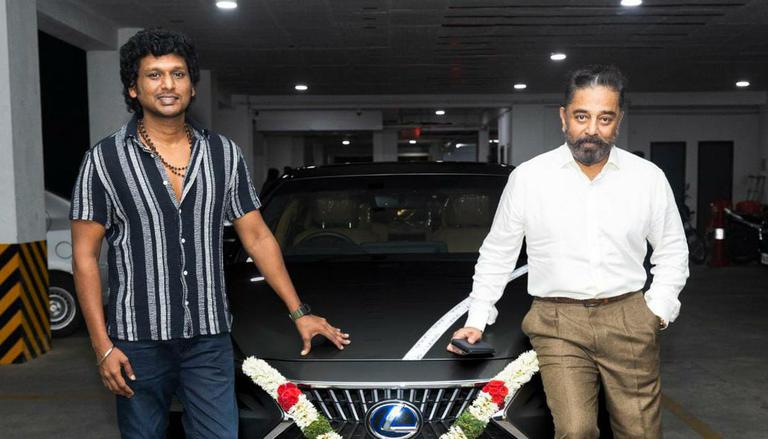 
Kamal Haasan is currently basking in the success of his film Vikram, in which he took on a key role alongside Vijay Sethupathi and Fahadh Faasil. Apart from being hailed by the audience and critics alike, the film has also been doing exceedingly well at the box office. As the film recently joined the coveted Rs 100 Cr club, Kamal Haasan gifted the film's director Lokesh Kanagaraj a luxury car.

A recent picture of Kamal Haasan gifting his film's director Lokesh Kanagaraj a car has been doing the rounds on social media. This comes as a sweet surprise for Kanagaraj as the film enters the Rs 100 Cr club at the worldwide box office. The picture that has surfaced online saw the duo smiling from ear to ear for the camera, with the car covered with a blue cloth in the background.

Have a look at the picture here

Lokesh Kanagaraj has been extremely grateful for the love fans are showering on the film and took to social media to share a sweet note of appreciation. He mentioned this was the 'most emotional' he had ever felt as he stated that it was an 'honour' to have directed the film. He recounted the 18 months he spent working on the film and mentioned that the movie was a gift to Kamal Haasan from a 'fanboy'. He also thanked the audience for the love and praise they have been showing for the film and the team.

Vikram is just the beginning. The universe belongs to earnest craftsmen like you. Thank you our dear Director Lokesh @Dir_Lokesh. #Vikram https://t.co/LffqbbQXsk

According to the industry tracker Manobala Vijayabalan, the film minted a total of Rs 125.57 cr after its third day on the bog screen across the globe. It opened with Rs 48.68 cr on the first day, and then went on to mint Rs 36.07 cr and Rs 40.82 cr on its second and third day respectively. Fans now await which other records the film will break at the box office. Apart from the power-packed trio, the film also saw Arjun Das, Harish Uthaman, Narain, Hareesh Peradi and others in lead roles.