Kamal Haasan is gearing up for the release of his much-awaited film 'Vikram', in which he takes on the lead role alongside Vijay Sethupathi and Fahadh Faasil. 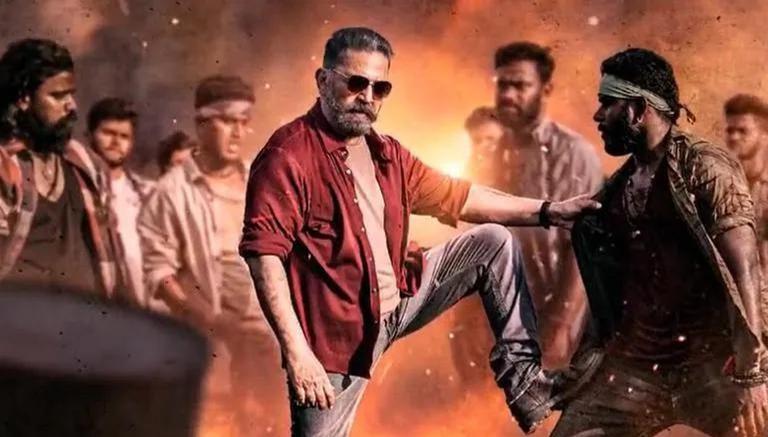 
Kamal Haasan is currently gearing up for the release of his much-awaited film Vikram, in which he takes on the lead role alongside Vijay Sethupathi and Fahadh Faasil. The makers of the film have now surprised fans with the release of the song Badle Badle from the film's Hindi version. The movie is scheduled to hit the big screens on 3 June 2022, and fans are eager to watch it in theatres.

The Vikram makers took to social media on Tuesday as they surprised fans with the first Hindi single from the film and won hearts online. The Badle Badle video saw Kamal Haasan rock the dance floor. He danced with all his heart and the energetic dance number was hailed on social media.

Raaj Kamal Films International shared the video of the song on YouTube and the video garnered thousands of views and likes within no time. What makes the song special is that apart from seeing the actor dancing, fans also get to witness him crooning the track.

Fans and followers headed to the comments section of the video on YouTube and flooded it with heart and fire emoticons as they hailed the actor and the song. They mentioned that the movie would be a 'Box Office blast' and wrote that Kamal Haasan's 'talent is endless'.

They appreciated that the lyrics of the song did not seem like they were only dubbed in Hindi and praised its authenticity. They also mentioned that their first instinct on hearing the song was to dance, and they wished the actor and the film's crew their best, ahead of the release on June 3.

The film is set to release on June 3 and according to reports by trade analyst Ramesh Bala, it is the biggest pre-release business of Kamal Haasan's career. His analysis hints that the film will be a major box office success and will release in multiple languages including Telugu, Malayalam, and Hindi. Apart from the powerful trio sharing the screen, the film is also expected to feature a cameo by Suriya, and fans can't wait to see what part he plays in the movie.

More than ₹ 200 Crs+ including Satellite and OTT in Multiple Languages..