Kamal Haasan is gearing up for the release of his much-awaited film 'Vikram', in which he will play a pivotal role alongside Vijay Sethupathi and Fahadh Faasil. 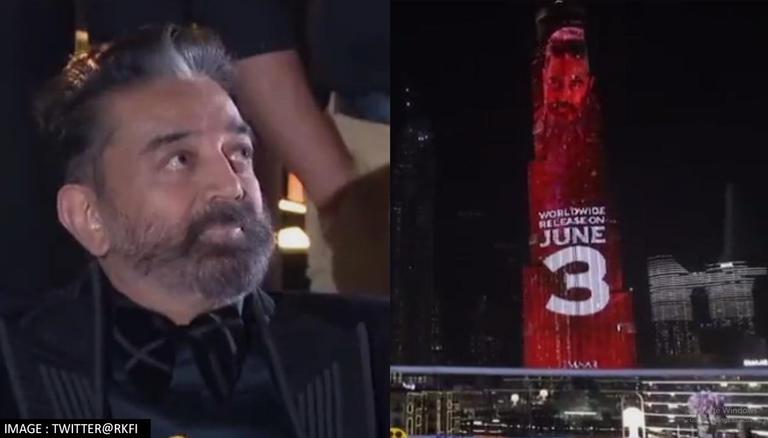 
Kamal Haasan is currently gearing up for the release of his much-awaited film, Vikram, in which he will play a pivotal role alongside Vijay Sethupathi and Fahadh Faasil. The film has become the talk of the town, a day before its release as fans are excited to watch the highly-anticipated film on the big screen on 3 June 2022.

Ahead of the release, the Vikram trailer was screened on the Burj Khalifa, and the makers have shared glimpses from the grand event online.

The makers of the film took to social media to share a clip of the screening of the Vikram trailer on the Burj Khalifa. Kamal Haasan was in attendance at the event, and was joined by thousands of fans, who chanted and cheered as they watch the trailer in a unique manner. The clip shared online saw the lead star arriving in Dubai and watching the trailer of his upcoming film on the Burj Khalifa. Several fans and supporters gathered at the venue and filmed videos and clicked pictures of the iconic moment.

The trailer of the upcoming film hints at heaps of action, drama and thrill, and fans eagerly wait to watch the film on the big screen. The actors were seen engaging in high-voltage stunts and action sequences and the trio was referred to as the Lion, Tiger and Leopard. The official summary of the film read, "Lion, Tiger and Leopard will prowl to hunt for their prey but the deer will run for its life. But if the sun sets then the animal which will survive to watch the new drain. Only nature decides but in this jungle when, where and who will watch the daybreak won't be decided by nature."

The makers of the film recently shared the first Hindi single from the film titled Badle Badle and the song soon won hearts online. Apart from seeing Kamal Haasan take the dance floor in the music video, the song also witnessed the actor singing, and fans heaped praises on him for his skill.