As they were welcomed into a room with confetti, the duo danced on the 'RRR' song 'Naatu Naatu' that got them the Golden Globe and even did the hook step. 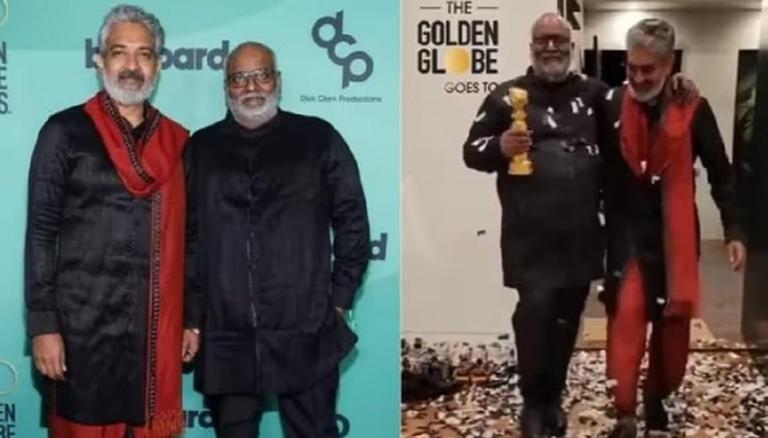 
'Naatu Naatu', the upbeat song from SS Rajamouli's blockbuster film 'RRR', won the award for the 'best original song-motion picture' Golden Globes 2023 in Los Angeles on Tuesday night. The song, which beat the likes of Taylor Swift, Rihanna and Lady Gaga to win the prestigious award is the first time that an Indian and Asian production has won a Golden Globe. The catchy track was composed by veteran music director MM Keeravani.

After their historic win at the Golden Globes, Rajamouli and Keeravani were seen shaking a leg backstage. As they were welcomed into a room with confetti, the duo danced for the 'RRR' song 'Naatu Naatu' that got them the Golden Globe, and even did the hook step.

A video surfaced on social media that was also reshared on Twitter with the following caption, "MMK SSR - Wait for the hook step!"

Rajamouli later shared a heartfelt note on Twitter where he thanked Keeravani, addressing him as 'Pedanna' (big brother). Rajamouli, who attended the award ceremony with his leading men and Keeravani, also expressed his gratitude towards fans around the world for showering love on the song.

'RRR' had also been nominated in the 'best picture-non English' category and lost out to Argentina's historical drama 'Argentina, 1985'.

'Naatu Naatu', filmed on Ram Charan and Jr NTR, roughly translates to dance like no one's watching in Telugu. Choreographed by Prem Rakshith, it has legions of followers still trying to master its steps. The track has been voiced by singers Kala Bhairava and Rahul Sipligunj. The song has been shortlisted for the best original song, along with 14 others, in the Oscars.