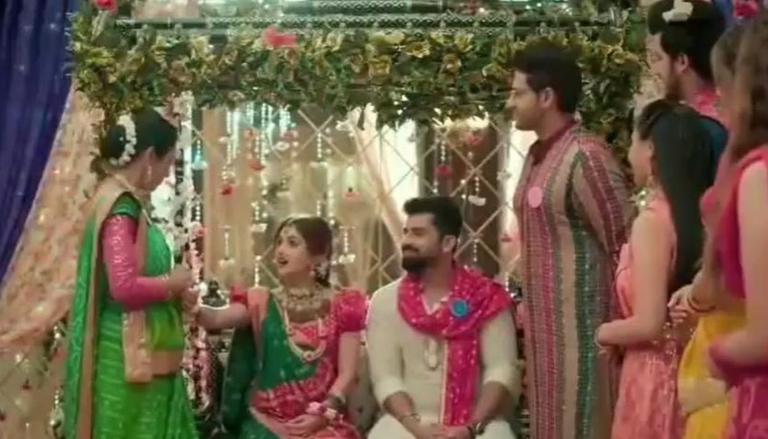 
Anupama 1 July 2022 episode begins with Anu telling everyone that Anu and Rakhi both love the baby equally and urges Rakhi to perform the puja first. Rakhi performs the ritual and asks the baby to be classy like her while whispering in Kinjal’s ear.  Baa hears the same and lashes out at her for trying to make the baby like her. As they both get into a heated argument, Anu intervenes and motivates them to continue their fight so that the baby is able to watch them. Baa and Rakhi realise their mistake and apologise to everyone.

Anu then asks Barkha and Ankush to perform the ritual to which they do the same and give them expensive gifts. Kinjal urges them not to give so many gifts to which Barkha taunts everyone stating that the Kapadia do not gift just flowers and fruits. Even Sara and Adhik perform the ritual while the latter recalls Sara’s childhood and teases her. As Pakhi performs the ritual, she gets emotional. Anu then says that now Samar will perform a special ritual because he is the brother-in-law of Kinjal.

Kinjal and Toshu then laud Samar’s efforts in making Kinjal feel comfortable in the house while understanding their emotions. Anuj and Anu then decide to perform the ritual on behalf of Vanraj and Kavya and they imitate the duo while leaving everyone cracked up. Baa extends gratitude to Anuj and Anu for the same. Pakhi tries to make a video call to Vanraj but he doesn't pick up the call. Later on, Rakhi meets Barkha and says that she wants to talk to her.

While the family dance together during the ceremony, Rakhi tells Barkha that Anu has all the property and Anuj loves her unconditionally. This leaves Barkha in shock. Anu overhears their conversation and says that she agrees with what Rakhi said.