Anupama 23 May 2022 Written Update: Anu Gets A Grand Welcome At 'Kapadia Sadan'

Anupama 23 May 2022 Written Update: As Anu and Anuj leave after the bidai ceremony, Anuj takes Anu to his parents' house for Graha Pravesh. Read further. 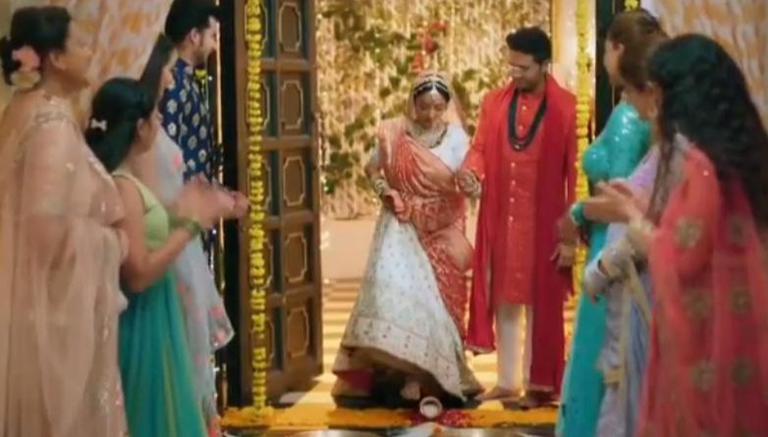 
Anupama 23 May 2022 episode begins with Pakhi, Toshu and Samar bidding goodbye to Anu and urging her to live her life. Anuj then dances for Anu and even makes her wear her sandals the same way he did when he met her during the college reunion party. they both then leave the Shah house while Anu recalls her time spent in the house. They then sit in the car and drive ahead. Anuj then reveals that he just doesn't like the bidai ceremony at a wedding.

As Anuj and Anu talk about their life, the driver informs them that the tyre got punctured. On the other hand, Vanraj sits alone and thinks that he will have to play the role of his kids' mother and father. He then decides to put an alarm for Bapuji's medicines and Kinjal's vitamins along with keeping a note of Pakhi and Samar's classes while paying the bills. He then wonders how a lady manages to handle all this. On the other hand, as Anuj and Anu wait in the middle of the road, they spend a romantic conversation together.

As the duo head toward home, Anu asks him why are they going in a different direction to which Anuj closes her eyes stating that he had a surprise for her. As they both arrive, Anu opens Anu's blindfold and reveals his parental house to her. She asks why didn't he ever mention the house to which he says that he gave it to Malvika and never thought about it. He even revealed that he never felt like living in the house because of loneliness and now when he is here with Anu, he will not feel the same. As they both enter the house, Devika welcomes her while the Shah family perform the Graha Pravesh rituals. Anu then asks Anuj to perform the rituals with her because even he is returning after 27 years.

READ | 'Anupamaa': Netizens get emotional as Anuj ties the knot with Anupama after 27 years

As Anu and Anuj sit together, he tells her that he has transferred his business and his house to Anu. While GK brings the papers, Anu sits and gets teary-eyed.