Fans of Rupali Ganguly's TV show Anupamaa are about to see a new twist. The makers have roped in actor Apurva Agnihotri and have revealed his first look.


Fans of Rupali Ganguly's TV show, Anupamaa are about to see a new twist soon. The makers of the show have recently roped in actor Apurva Agnihotri and have also revealed the first look of his character on social media. However, there is no official statement about the description of his role yet. Apurva will be returning to television screens after a gap of three years with Anupamaa.

A look at Apurva Agnihotri in Anupamaa

The producers of the show, Director's Kut Productions took to their Instagram and shared the first look of Apurva in the form of a video with glimpses of the actor. He can be seen sporting long hair with a beard while playing the guitar, the flute and more. They revealed his character’s name in the caption and wrote, “Dr Advait Khanna..What’s the new twist in Anupamaa's life? Keep Watching #anupamaa Monday-Saturday at 10 pm on Star Plus. @rupaliganguly @sudanshu_pandey @apurvaagnihotri02”. 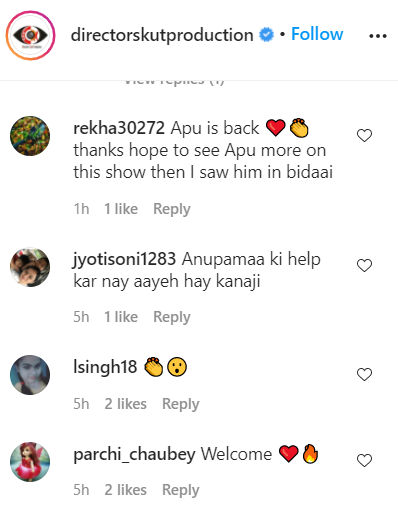 Apurva Agnihotri is known for his role as Rajiv in the 1997 film Pardes which is directed by Subhash Ghai. He played the role of Armaan Suri in the television show Jassi Jaissi Koi Nahin. The actor also participated in a couple of reality shows including Nach Baliye with his wife Shilpa Saklani. He has appeared in shows such as Pyaar Ka Dard Hai Meetha Meetha Pyaara Pyaara, Ajeeb Dastaan Hai Yeh and Saubhagyalaxmi.

Anupamaa is a drama television series that premiered in 2021. Directed by Romesh Kalra, Anupamaa cast includes Rupali Ganguly in the lead along with Sudhanshu Pandey, Madalsa Sharma, Paras Kalnawat and others in prominent roles. Based on Star Jalsha's Bengali series Sreemoyee, the show follows the story of a lady who parts with her ambitions and goals in a bid to raise her family. The woman feels dejected when she fails to get any credit for her sacrifices and eventually decides to live on her terms. The IMDb rating of the show is 6.3 out of 10.

Recently, Rupali Ganguly resumed shooting after testing negative for the novel coronavirus. There is no confirmation about when Apurva Agnihotri will be seen in the show.

READ | 'Anupamaa' Spoiler: Vanraj runs away from home due to impending divorce pressure?