Jennifer Winget Shares New Picture On Instagram, Says 'I Just Got To Be Dramatic First!'

Jennifer Winget shared a picture of herself all dolled up and said that she would get over anything put in her path once she's done being dramatic over it.

Jennifer Winget shared a picture on Instagram on March 19, 2021, which showed off a sultry avatar of hers. She is showcasing a very moody expression on her face. She is seen posing in a room that is lighted by a dim warm yellow light. The actor is posing with a strand of hair between her fingers staring off somewhere in the distance. She is wearing a short embellished golden dress with a border of the ruffled net at the bottom. The dress has a plunging neckline that is covered by a piece of mesh. While the actor's makeup is not very clearly visible in the darkened room, her hair which she is twisting is left to fall down her shoulders in loose waves.

Commenting on perhaps her expression in the picture, Winget said that she would be able to get over any situation on hand as long as she got an opportunity to be dramatic about it at first. She said that her crew who she called her ‘super troupers’, could be asked to testify that what she had said was true. She then went on to tag all those who were her ‘super troupers’ who were the ones who had gotten her ready for the picture, from her photographer to her makeup and hair artists. 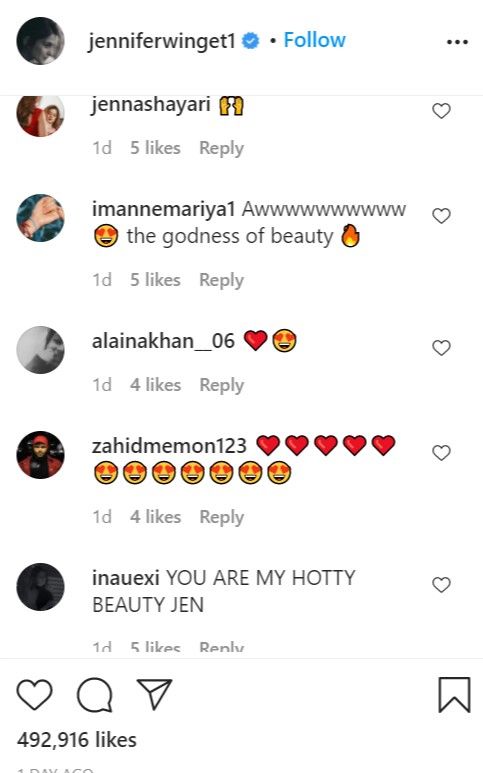 Jennifer Winget’s Instagram followers took to the comments to express their views on the actor's looks. Most of her fans commented by saying she looks absolutely gorgeous in anything that she wears. Some people also commented that every picture of hers stole their hearts and made them an even bigger fan of hers. Most of the comments were in the form of emojis which were mostly heart eyes and fire ones expressing fans' appreciation of Jennifer Winget's photos and her beauty. Jennifer Winget's Instagram picture has received 3,518 comments and 493k likes as of now.

Another one of Jennifer Winget’s photos in the same attire sees the actor posing with a few glasses of wine. In the picture, Jennifer Winget is looking back at the camera with parted lips and a moody look. She has captioned the picture by saying, “Friends: “Wear something casual, we’re just chilling tonight.” Me: âœ¨”.