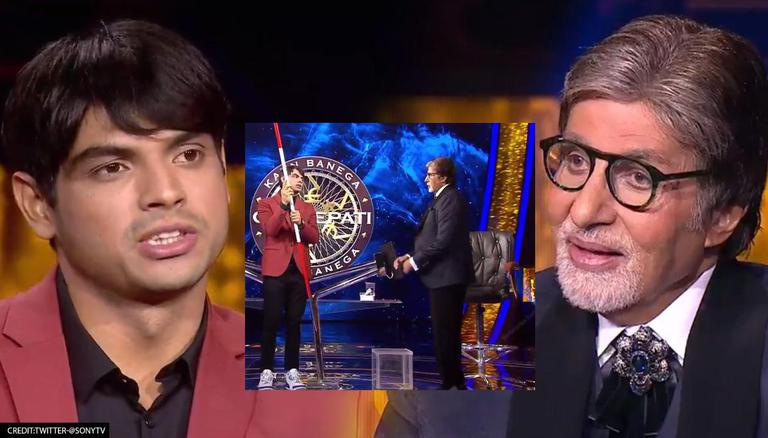 
The forthcoming episode of Amitabh Bachchan's Kaun Banega Crorepati 13 will feature Olympic medallists Neeraj Chopra and PR Sreejesh. The teaser of the episode released by Sony Television Entertainment has since gone viral on the internet as the duo can be seen having a jolly time with the veteran actor despite being on the hot seat. One of the previews from the upcoming episode has caught the public eye where the audience witnessed an epic collaboration between Sports and Bollywood as Bachchan received some professional tips from Chopra on how to skillfully throw the Javelin. Check out the video here.

The 23-year-old Olympic medalist Neeraj Chopra showed the three different grips used to throw the Javelin and also showed his preferred ones to the veteran actor. The duo also shared a laugh together as the young player stated, ''Main aapko phek ke dikha deta par...'' (I would have demonstrated my throw here..) to which Bachchan was quick to discourage the idea saying, ''Sir, bilkul mat kijiye sir'' (Please do not do it, sir). This earned a round of laughter from the audience.

More on Neeraj Chopra and PR Sreejesh on KBC

The exciting teaser of the episode showed the duo being welcomed with a roar of applause from the audience for their contribution to the Indian sports after winning medals at the Tokyo Olympics 2020. Apart from answering the general knowledge questions, the KBC promo also promised a fun exchange between the athletes and the veteran actor as Neeraj Chopra will also be seen giving lessons on speaking Haryanvi to Amitabh Bachchan. The episode is scheduled to be released on September 17.

READ | Neeraj Chopra's dream gets fulfilled as he takes his parents for 'first flight', see pic