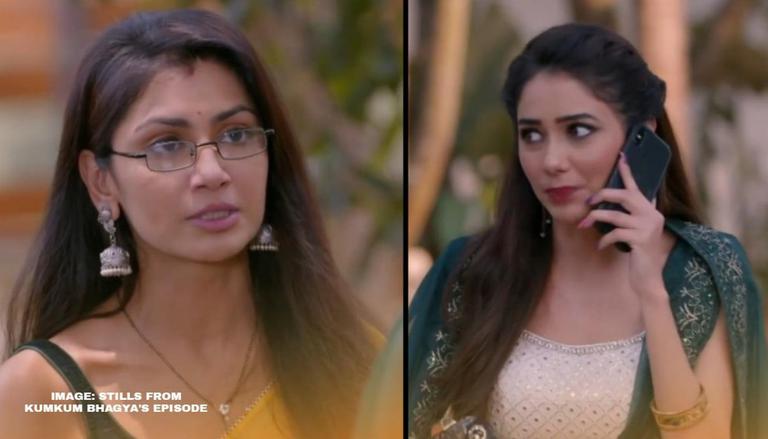 Kumkum Bhagya latest episode starts with Shahana bringing tea for Sarita Behen and tells her it will help with her tiredness. Sarita Behen says she cannot drink and be at peace until she comes to know why Tanu asked Pragya to meet her there. Shahana says she will call Aryan and get the information in a minute. When Aryan does not pick the call she says Tanu must have done some drama or Pragya must have taken her to the task. Tanu tells everyone that they should behave nicely with her since she is going to be an important member of the family. Abhi finds Pragya's message on his phone thanking him to support her. Pragya comes in and tells Tanu she has come to talk with her family. She confronts Dadi, Aliya, Mitali, and her daughters for turning their backs on her. Pragya tells Tanu she is ready to divorce the family but with a curse that Tanu will never be happy. Pragya leaves saying she will talk to her lawyer.

Rhea makes Tanu fall in front of everyone

Tanu goes to take her purse before leaving but she falls when Rhea sneakily steps in between. She goes on to chide her but Abhi leaves. Ranbir sides Rhea and Tanu gets angry and says after divorce she will become a member of the family and they will regret their behaviour. Prachi heartbreakingly looks at Rhea and Ranbir having a laugh together. Pragya calls Abhi if she overacted in front of Tanu but Abhi says she was perfect. She spots Tanu walking away with a tense face and follows her. Tanu tells Pradeep to not call her again and again. He says he will come to meet her, Tanu asks him not to since she is fighting for them and planning for their future. Pragya listens to the conversation and thinks of finding her weakness as she did with her family.

Abhi tells Rhea and Prachis she loves them both

Abhi talks with Rhea and Prachi and asks Rhea why did she make Tanu fall. Abhi says she has Pragya's quality of making others fall. Prachi asks Abhi if she has any qualities of her father and Rhea says he is her dad and she has all of his good qualities. Abhi says he loves them both equally. Tanu calls her Lawyer to seek his advice. He tells her he will force Pragya in court to agree to their sayings. Prachi runs in Rhea and tells her that she always used to hear about siblings' mischiefs, bonding, and rivalry but today she witnessed it. She says when she made Tanu fall she felt she has unique qualities just like her mom. Rhea says she is her mom too.

READ | Where is 'Kumkum Bhagya' being filmed? A look at the show's current shooting location

Sarita Behen comes into Pragya's room and finds her crying. She asks her for the reason for her pain but she refuses to tell her. Sarita says did Tanu do something this time and Pragya tells her about the divorce. Sarita tells why is she worrying since the divorce is fake. Pragya says they think they are trapping Tanu but it is Tanu who is doing that to them. Sarita Ben explains to her that after tomorrow's hearing she will get some time and she can gather proof against Tanu. Pragya tells what if she could not get proofs and she couldn't stop the marriage. Sarita tells her that she is fighting for the truth and says she and Mr. Mehra's relations is on hearts whereas Tanu will be just on paper. She tells her not to worry and goes to make tea.