Kushal Tandon Posts A Story About 'moving On', Tags Bestie Mrunal Thakur In The Story

Kushal Tandon and Mrunal Thakur have repeatedly stated that they are not in a relationship but the former tagged Thakur in a story about 'moving on'.


Kushal Tandon took to Instagram on April 21, 2021, to post a story that seemed a little cryptic. What made the story even more bewildering was the fact that he had tagged his alleged ‘bestie’ in the status. The post which Kushal Tandon shared read, “Closure is a scam. Accept what they did and move on”. He tagged Mrunal Thakur in the story while adding a tongue sticking out smiley and said nothing more. The two of them have reiterated time and again that they are best friends and not lovers but their posts and pictures often confuse their fans and followers and this story again got a lot of fans wondering. 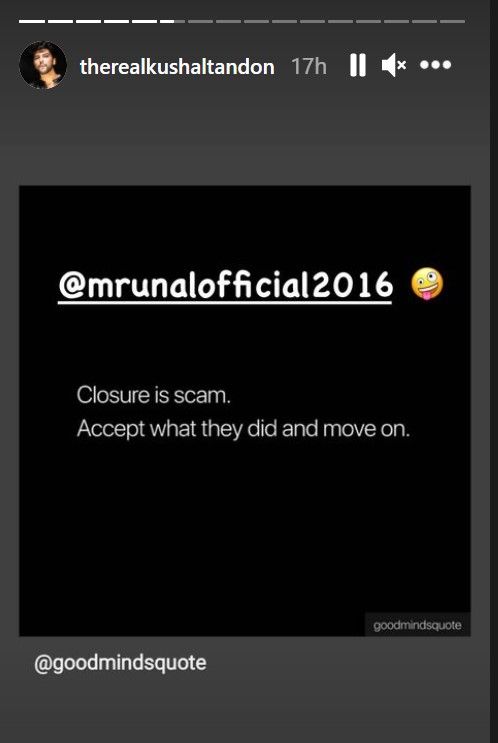 The talks about the two of them being in a relationship started spreading when Kushal Tandon had posted a picture with Mrunal Thakur on his Instagram while calling her his ‘Soulmate’. The post was shared on Instagram on April 3, 2020, and was captioned, “Love of my life: they say ur soul mate is ur lover that’s wrong ...... soul mate can be ur bestie too. sullu this life and till eternity u will always be my soul mate baby”. While the terms of endearment and pictures made people think the two were in a relationship, the caption itself clarified that the two of them were only friends who loved each other dearly.

The Bahubali: Before the Beginning series had piqued Mrunal Thakur's interest and she was all set to have a part in the series until things took a turn. This will be a prequel to Baahubali the film and will be released directly on Netflix. In reality, Mrunal had already completed a season of the series in 2019. However, it appears that she has opted out of the project. According to an article in Peepingmoon, the actress had already filmed 70% of her scenes. So, why did she cancel? “Mrunal is no longer a part of the series,” a source said. Mrunal left the project due to a lack of clarification from the production house after shooting 70 per cent of the film two years ago. She had other professional commitments.