MJ5, the dance group that impressed the audience with their quirky and perfectly synchronised dance performances, has released their debut music video Bawaal.

Dance group MJ5 has won the hearts of the audience by incorporating various types of moon-walks in their performances. The group has been vocal about their love for Michael Jackson and this is what brought them together as a group in the first place. After showing off their dance skills on various dance reality shows, MJ5 from India's Dancing Superstar has now released their first-ever solo music video titled Bawaal. The group took to their Instagram to announce the news to their fans.

In the video, all the members of this boy group are seen donning bright coloured suits and enjoying the Maldives. They are also seen having fun on the beaches and having a good time on the islands. Their classic movies which are always in a synchronised manner are a treat to watch. The beats of this track make one tap their feet involuntarily.

The song is sung by Kartik, Rohit & Dennis. The music for the same in composed by Dixant and the lyrics are penned by Nitish & Dixant. Bawaal is produced under the banner of One Digital Entertainment, the same agency that handles popular YouTube Prajakta Koli. She took to her Instagram stories to promote MJ5's new song. She is posing with the group and all of them are all smiles for the camera. Prajakta is wearing a white tee-shirt and white blazer paired with a pair of denim. Whereas the MJ5 groupmates are seen rocking varied coloured suits. While sharing the picture, Prajakta wrote, "@mj5_official just dropped their new single." 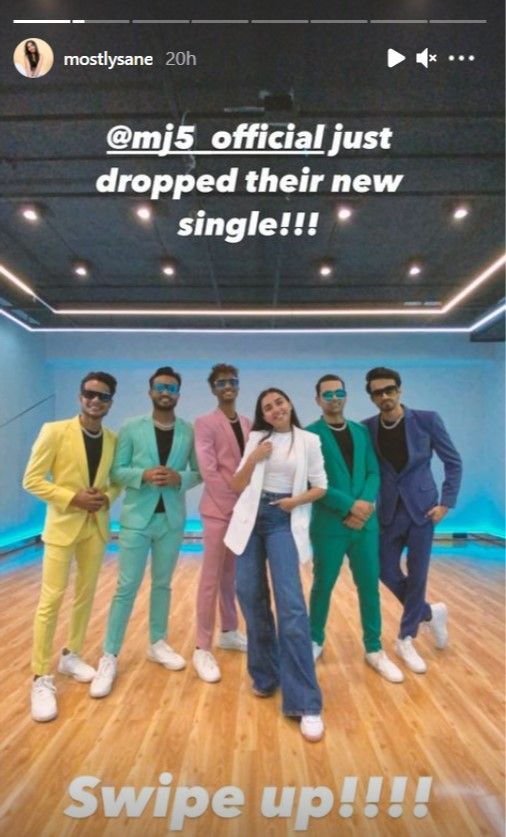 The group consists of five members namely  Himanshu Gola, Rohit Singh, Vishnu Kumar and Dennis Anthony and R Kartik and was formed in 2013. The auditioned for India's Dancing Superstar and also won the show which shot them to fame. The group is known for performing Michael Jackson's popular dance step the 'moon walk' in all of their performances. They also hold the world record for performing 26 different types of moon-walks. Their Instagram feed is full of videos of their dance rehearsals and behind-the-scenes of their performances. They also share their fun photos on social media and also let their fans know of their whereabouts.