Nakuul Mehta Gives Health Update After His Appendix Surgery; 'The Good News Is That..'

The popular 'Bade Achhe Lagte Hain 2' actor Nakuul Mehta earlier had his fans worried when the news about his surgery made the rounds on social media. 
Nakuul Mehta, known for his role in Bade Achhe Lagte Hain 2 alongside Disha Parmar, earlier had his fans worried when the news about his surgery made the rounds on social media. The actor has now taken to his social media account and confirmed the rumours about his health as he revealed that he had appendix surgery. The actor mentioned he was 'healing' and fans and followers sent him heaps of love as they wished him a speedy recovery.

The Indian TV star took to his social media account and penned down a lengthy note and began by quoting an iconic line from the Tom Hanks film Forrest Gump as he wrote, "My mama always said, 'Life was like a box of chocolates. You never know what you're gonna get." He then mentioned that his life took a drastic turn and went from 'celebration to hospitalization' within the span of 24 hours. He mentioned that his first thought was about his filming schedule, but then asked, "Can anyone plan life?"

The actor then took a witty approach to the topic and mentioned that the 'good news' was that he only lost his appendix, and 'hopefully' not his sense of humour. The actor thanked his fans and followers for the love and wishes they had been sending him and mentioned he was 'overwhelmed' by them. He wrote-

"To everyone who reached out, Like Forest Gump would say, "My Mama always said life was like a box of chocolates you never know what you're gonna get..' We went from celebration to hospitalisation in a span of 24 hours The first thing which hit me was.. damn, filming is going to be affected but then again can anyone plan life, I'm overwhelmed with all the messages, calls & tweets. It may take me a few days to get to them whilst I regain my strength & pressing need for good coffee. However, the good news is that we have only lost our appendix & hopefully not our sense of humour!"

Several fans and followers took to the comments section and sent the actor their best as he recovers. His wife, Jankee also commented on the post and wished to get the actor back home soon. She wrote, "Let’s get you home now." Rasika Dugal, Tillotama Shome, Arunabh Kumar, and many other popular personalities from the industry wished for the actor's speedy recovery. 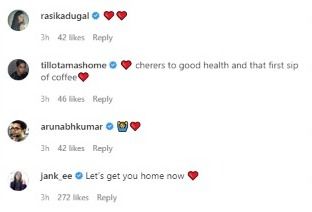