Priyank Sharma took to his Instagram to report a troll to cybercrime who accused him of cheating on his ex-girlfriend Benafsha Soonawalla.


Priyank Sharma recently took to his Instagram account to share a screenshot of his chats with an unknown user who claimed that he cheated on his ex-girlfriend Benafsha Soonawalla. In the screenshot, the user is seen telling Priyank that they want the couple to get back together. In the second picture, it is seen that the same user wrote, "Confirmed News, Priyank cheated on Benafsha" on their Instagram story.

This triggered Priyank to report the user to cybercrime. In the post, he wrote a long caption about how he has been accused of cheating by the so-called fans. He also revealed that for the past two years, he has been experiencing such online harassment. At the end of the post, he tagged the Cybercrime accounts. He wrote, "I love you TOO , so much you have no CLUE ,!,,Two years , some more than 2000 accounts, harassing/tagging me my friends and my family . Same time everyday following the same pattern . HOW MUCH ARE YOU GETTING PAID ? You can’t be a fan you OBSESSED F*** you are a SHAME ! Don’t take my admirers down by calling yourself one . We need help . ITS HIGHEST TIME ." The comment section is filled with his fans supporting the move. Check it out. 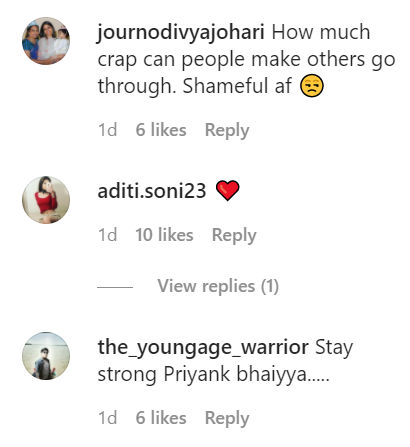 Priyank and Benafsha were in a relationship ever since they participated in a reality show, where they grew close to each other. Initially, they were good friends and on April 14, 2020, they made their relationship official by posting a cosy picture on their Instagram handles. Later, they confessed their love in various interviews. However, in October 2020, the two deleted their pictures and unfollowed each other on social media. Since then, the two have not been spotted together.

Priyank gained popularity after appearing in various reality shows such as Splitsvilla. He has also appeared in popular shows such as Puncch Beat and Laal Ishq. He will next be seen in Ekta Kapoor’s upcoming intense thriller web series named Mumbhai.