'Saath Nibhaana Saathiya 2' Written Update For May 18: Anant Tricks Radhika With His Act

In the latest 'Saath Nibhaana Saathiya 2' written update, Anant is sen putting on a show to trick Radhika into believing that he wants a divorce from Gehna. 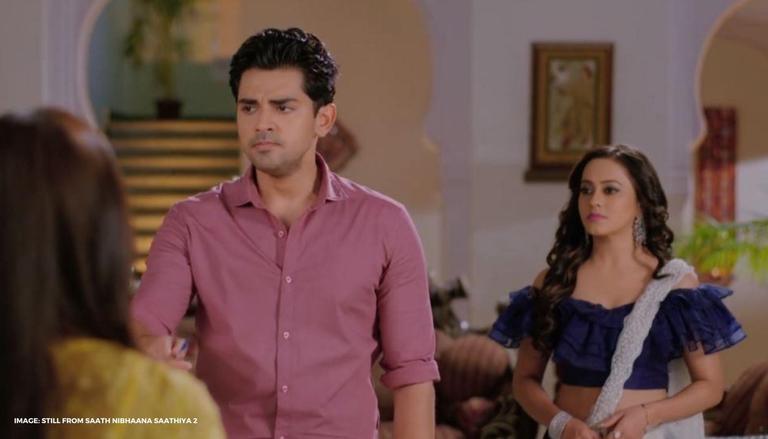 
Saath Nibhaana Saathiya 2 is a popular television drama show which has a huge fan following amongst the audience. The plot of this show revolves around the lives of Anant and Gehna, who fall in love, despite their polar opposite backgrounds. In the last episode of the show, Anant was seen asking Gehna for a divorce, have a look at where it leads.

Anant creates havoc in the family

The episode starts with Anant asking Gehna for divorce while the entire family is shocked at Anant’s actions. Bapuji is quick to jump into the situation and question his son for all the wrong things he has been saying. Pankaj also comes to Gehna’s rescue and asks Anant to not disrespect Baa and Bapuji on the basis of Radhika’s words. Chetan also expresses his outrage and also threatens to kick Radhika out of the house if she continues to create such misunderstandings amongst them. Anant stands strong on his stance but thinks to himself that he is extremely proud of his family for taking the right side. He also thinks that the whole scene will come to an end once Radhika’s truth is out in the open. Tia also speaks up against her brother and tells him that Gehna will not sign these papers, no matter what.

Baa asks Gehna to not be scared since the entire family is standing with her. Radhika takes Anant’s arm in front of everyone and tells him that his family has turned against him. Anant keeps his performance going and assures Gehna that divorce will happen no matter what.

Gehna walks into her room and meets Radhika right these. Radhika also hands her a chequebook and asks her to write whatever amount she deems fit. In return, she asks Gehna to leave Anant alone and free him from their marriage. Even with tears in her eyes, Gehna manages to give it back to Radhika and assures her that divorce will not happen no matter how hard she tries. Radhika seems quite proud about winning her love back and Gehna clears her misconceptions gracefully. She tells her that love cannot be won and it just happened even amidst the circumstances. She also warns that someday, Radhika will fall deep into her own web of lies, making it impossible to escape. She also asks Radhika to be scared of the day when Anant will actually learn the truth and react accordingly.

Paresh tries to talks some sense into Anant

Paresh walks to Anant at the terrace and looks at him in disappointment. Anant gives him a stick and asks him to use it as much as he likes. Paresh drops the stick and pulls Anant into a hug, taking him by surprise. He tells Anant that he needs to choose between Radhika and Gehna as they both seem to claim authority over Anant’s love.

Gehna is standing under the tree with divorce papers in her hands when Hiral decides to have a word with her. She tells Gehna that she needs to run away from this house if she has even an ounce of shame left. She tells her to sign the divorce papers and complete her education by paying for her own expenses. She also tells her that she had gotten a major promotion from being the servant of the house and now she should leave this place for the sake of everyone’s peace.

Radhika tells Ananat that they will find a solution to the problem. Anant is frustrated and asks her to leave so that he can peacefully think about how to divorce Gehna. He also asks her to think about her divorce and how she will make it happen. Radhika thinks to herself that all her plans are working and walks away with a smile. Gehna wishes to have a conversation with Anant and they have an awkward moment of silence in the room.