Hulu’s drama series 'The Handmaid's Tale' had set an unusual record at the 73rd Emmy Awards show, but not in the way they hoped with 0 wins from 21 nominations. 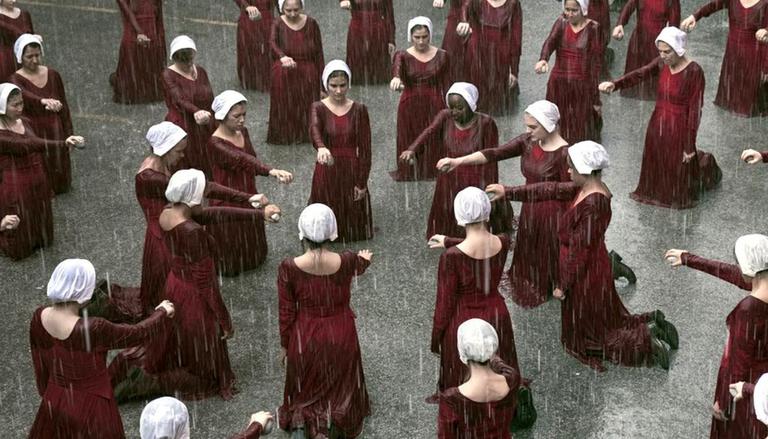 
Hulu’s drama series 'The Handmaid's Tale' has set a record at the 73rd Emmy Awards, but not in the way they hoped. With zero wins for 21 nominations at the awards, the dystopian drama set a record for most Emmy losses in a single year.

While the Elizabeth Moss-fronted series was placed third behind Netflix’s ‘The Crown’ and Disney Plus’ The Mandalorian’ with 24 nominations, and ‘WandaVision’ with 23 nominations. It was expected to pick up a couple of awards between the Creative Arts and Primetime Emmys ceremonies. However, it failed to earn a single trophy this year.

'The Handmaid's Tale' becomes the most Emmy losing series

The Handmaid's Tale has set a new record for most losing series, topping AMC’s Mad Men’ which missed out 17 awards back at Emmys in 2012. Earlier, Northern Exposure and The Larry Sanders show came up empty-handed in Emmy history which went zero for 16 nominations in 1993 and 1997 respectively.

However, back in 2017, The Handmaid's Tale became the first streamer to win the Emmy Award for drama series. Since then, the series has earned nominations for the award in 2018 and 2020.

'The Handmaid's Tale' to decide on its sixth season

Meanwhile, the series is heading into its fifth season and the team is yet to decide on whether to end it with Season 5 or to continue. Hulu Originals’ script content head, Jordan Helman has recently spoken with Variety about the show’s future.

“At the moment, the writers are working away breaking Season 5,” he said. “I think what’s really exciting about ‘Handmaid’s Tale’ is that piece, year after year after year, sees viewership growth, unlike anything we’ve ever seen. We’re having conversations right now about what the future of ‘The Handmaid’s Tale’ holds. Also, how ‘The Testaments’ plays into that kind of larger strategy. What [executive producers] Bruce [Miller], Warren [Littlefield] and Lizzie [Moss] have delivered for us over the course of the past several years, really warrants a tremendous amount of trust both ways. And so I have the deepest belief that they’re going to come to us with a plan about how much longer the show needs to go on. And I’m certain that that would be a plan that we’re all on the same page about.”