First Look Of 'Bridgerton' Season 2 Is Released; Here's Everything You Need To Know

Focus of 'Bridgerton' Season 2 will be Anthony, Daphne's older brother, as he seeks a woman to accompany him in raising an heir for the Bridgerton family. 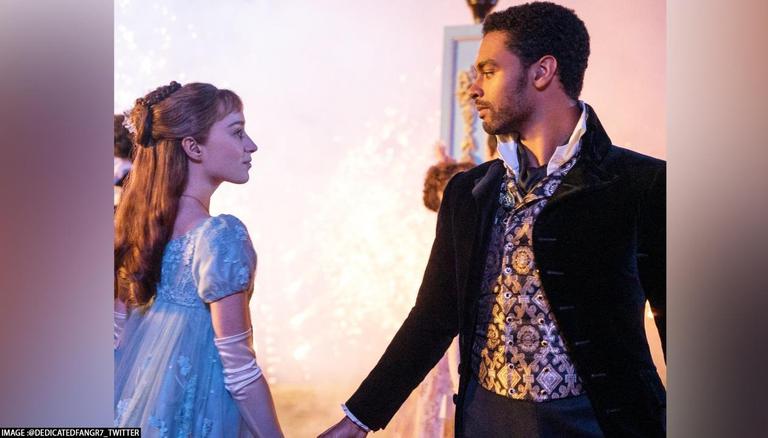 
The first look of the second season of Shonda Rhimes' Bridgerton, which follows Anthony Bridgerton, portrayed by Jonathan Bailey, and his love interest, Kate Sharma, played by Simone Ashley, has been released. The focus of the show is changing from Anthony's sister Daphne, who is portrayed by Phoebe Dynevor, and her husband Simon, played by Regé-Jean Page. The focus is shifting to the new leading couple for Season 2. Bridgerton's new season will give fans a view at Lady Whistledown, a high-society gossip writer voiced by Julie Andrews, who was revealed to be Penelope Featherington, played by Nicola Coughlan, in the end of the first season.

The focus of the second season will turn to Anthony, Daphne's older brother, as he seeks a woman to accompany him in raising an heir for the Bridgerton family estate. The Viscount Who Loved Me, the second novel in the series, will be the focus of the second season. In the novel, Anthony finally thinks it's time to settle down but he refuses to fall in love because he is terrified of dying early like his father and leaving behind a lovely wife. Things take a turn since fate has different plans for him when he finds his match in the form of a young woman named Kate, who isn't quite interested.

On Saturday, September 25, during Netflix's global fan event TUDUM, the first video from Season 2 was released. The video introduced viewers to Simone Ashley's Kate and offered the first glimpse of her and Anthony's enemies-to-lovers dynamic. During the Bridgerton TUDUM panel, Ashley teased, "There's a lot of arguing." Their connection is "volatile" and "passionate," according to Bailey. Anthony's sideburns would be drastically decreased in Season 2, according to Jonathan Bailey, who also teased what Anthony's journey will entail in the upcoming season.

When will Bridgerton season 2 release?

Bridgerton Season 2 is yet to be given an official premiere date. Rege-Jean Page, who played the Duke of Hastings in Season 1, will not be reprising his role. Page will not be available for filming Season 2 of Bridgerton, according to a letter from Lady Whistledown posted on the Bridgerton Instagram account. Page will, however, remain a part of the Bridgerton family. Dynevor will return as Daphne, a devoted wife and sister who will assist Anthony on his quest for love, according to the note. However, book lovers are well aware that this information will have a significant impact on the plot.

Simone Ashley, who starred in Sex Education, has joined the cast of Bridgerton Season 2 as Kate Sharma. Anthony's love interest in the second Bridgerton novel, which will serve as the foundation for the following episodes, is named Kate Sheffield. Charithra Chandran, a stranger to Bridgerton Season 2, was added to the cast in early April, according to Deadline. She'll play Edwina Sharma, Kate's younger sister and the woman Anthony is originally drawn to as a potential wife. Chandran will be joined by Rupert Young, who will play Jack, a stranger to the Ton who has ties to one of the most renowned families. Jack is a Season 2 character, who was not based on any of the books.

Rupert Evans of Charmed joined the Bridgerton Season 2 cast in May 2020. Edmund Bridgerton, the family patriarch, will be played by him, and he'll most likely appear in flashbacks because Edmund has already died in the present day. Jonathan Bailey and his Bridgerton siblings Benedict played by Luke Thompson, Colin played by Luke Newton, Eloise played by Claudia Jesse, Francesca played by Ruby Stokes, Gregory played by Wil Tilston and Hyacinth played by Florence Hunt will certainly return.

Chris Van Dusen created Bridgerton, which Shonda Rhimes has produced. It is based on the works of Julia Quinn and is Rhimes' first Netflix scripted series. On December 25, 2020, Netflix released Bridgerton. The first season's eight episodes were well-received. It had become Netflix's most-watched series, with 82 million households tuning in. On Netflix, the series debuted at No. 1 in 76 countries. The series was revived for a second season in January 2021. Van Dusen, the show's creator, announced on Twitter in April 2021 that the show has been renewed for a third and fourth season as well.