FRIENDS Reunion: Chandler And Monica Were Just Supposed To Be A Fling, Reveal Showrunners

FRIENDS Reunion special has spilled some major secrets. Turns out the show's hit couple Chandler-Monica were supposed to only have a fling and nothing more. 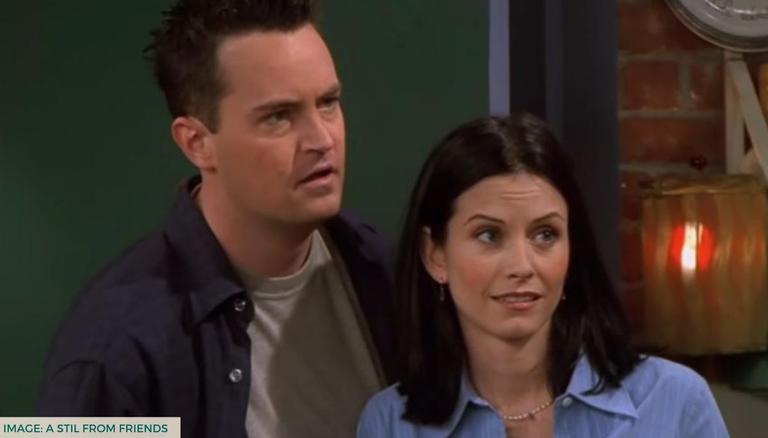 IMAGE: A STILL FROM FRIENDS


Chandler-Monica were just supposed to have a fling? The FRIENDS Reunion Special has finally aired, and the cast and crew spilled some major details. Apart from revisiting the sets and doing table reads of some of the most iconic scenes, the crew dropped a major truth bomb. While many fans to this day ship ‘Mondler’, turns out Monica and Chandler were just supposed to just have a fling. Find out how this plot was soon changed.

Were Chandler-Monica only supposed to be a fling? FRIENDS cast answers

The FRIENDS Reunion Special has finally aired in India on ZEE5. The show's fandom has been eagerly waiting for this highly anticipated reunion for months. Apart from the show’s cast, FRIENDS creators and writers Marta Kauffman and David Crane also spilled interesting details about the show. Marta Kauffman revealed the time the showrunners really decided to listen to the audience and their requests was for Chandler-Monica. Marta said, “One of the times we listened to the audience the most was when we were shooting in London. Monica and Chandler are in bed together”. This plot twist takes place during Ross’ wedding to Emily.

Soon a clip of Ross entering Chandler’s bedroom, screaming, “I am getting married today” was added. Chandler awkwardly agreed with Ross and the later left. The moment the door slammed, Monica revealed herself from the bedsheets, and said, “Do you think he knew I was here?” This moment brought in a wave of hoots from the audience, something that the showrunners did not expect.

David Crane remembered this moment from the taping and said that the audience’s reaction was “insane”, so they let them continue screaming. David then revealed, “I think that moment was the beginning of how we re-thought Monica and Chandler. The original plan was they would sleep together in London and it was a brief thing and we would have some fun with it afterwards”.

Marta Kauffman in her confessional also talked about the audience’s reaction to Monica and Chandler’s fling. She said, “The way the audience reacted we realized there’s more to this and we need to pay attention. That was the end of the season, so we really had time to ruminate and think. But it was such a powerful moment that we knew we had to explore it more”. David Crane then chimed and said, “We expanded it (Monica and Chandler’s fling) from just one-night in London to ‘this could be a thing’ thing”. Marta added, “We still at that point didn’t quite realize how far we’d go, we still thought maybe we’d have fun with them doing it in secret and hiding it, which did give us a lot of funny stuff”.

The special continued and soon Mindy Kaling also mentioned that Chandler and Monica’s secret fling was one of her favourite moments on the show. Many FRIENDS fans from across the world also spoke about the same. In the end, Monica and Chandler got married and even had two kids. Like Phoebe once said for Rachel and Ross, Monica and Chandler were each other’s “lobsters”.

IMAGE: A STILL FROM FRIENDS