'FRIENDS Reunion' Review: A Tear-jerking And Jovial Homage That Was Worth Waiting For

FRIENDS Reunion special has finally premiered on ZEE5. The special brought back the show's six cast members back for the first time in 17 years. 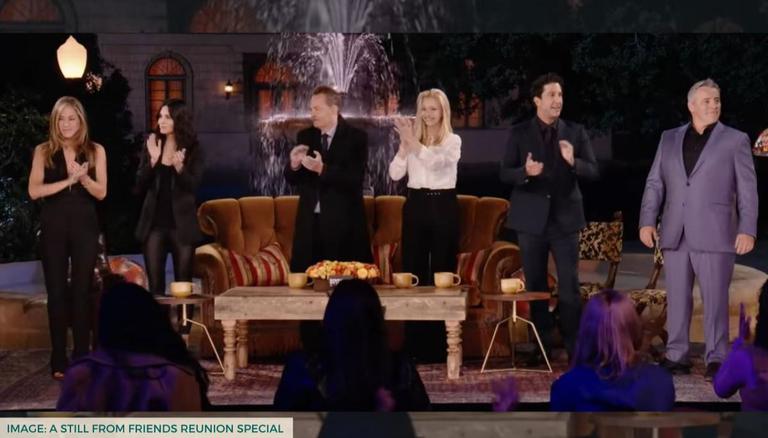 The FRIENDS Reunion announcement brought in a wave of joy amongst its fandom. Many fans were quick to jump to the conclusion about it being an episode where the characters reunite. But the Reunion special is completely the opposite of this. The six cast members- Jennifer Aniston, Courteney Cox, Lisa Kudrow, Matt LeBlanc, Matthew Perry, David Schwimmer reunited as themselves and not as their memorable characters. Through this special episode, they took a trip down memory lane and visited the show’s iconic set, reenacted a few scenes from the show, and even met some of the other supporting cast members. The FRIENDS Reunion also did a deep dive into how this show touched the hearts of people across the globe.

The moment the six cast members reunited on the set, it felt like home. The warmth and comfort spread through the 10 seasons, was back. The chemistry between these six actors is undeniable and shines brightly till the end. The FRIENDS Reunion starts with the cast visiting the show’s set at Warner Bros. Studio and immediately they all just fit in like puzzle pieces. They talk about their memories on the show as if it was just yesterday, they filmed their last scenes. Moreover, the cast did make it feel like they were back home and were ready to welcome their fans with open arms. The cast reunited after 17 years but their on-screen presence is still eminent. This was quite visible the moment they reenact few scenes from the show.  As Kit Harington rightly pointed out, “These six actors are master of physical comedy”.

The FRIENDS Reunion special was not just about the six cast members but also about its supporting actors and the crew. Marta Kauffman, David Crane, and Kevin Bright all added a new flavour to this special. They were the puppeteers who were handling these six characters that became a symbol of friendship, love and struggles of adulthood. Various celebrities also gave the audience a glimpse of how the hit sitcom meant so much to so many. Not just celebrities, but the lives of these six characters had resonated with millions across the globe, whether it was BTS from South Korea or a young woman from Ghana.

READ | Friends Reunion: Friends cast reminiscences on 'when the world began to change' for them

The show’s director Ben Winston made sure to not just keep the special all about talks and no laughs. Throughout the special, bits and pieces of the show’s episodes have been included. Hence the cast members were not the only ones taking a trip down memory lane but the audience did it too. Right from Pheobe's "My eyes! My eyes!" to Ross' "Pivot, pivot".

FRIENDS was a TV show that was not just about these six characters but also the supporting cast members who gave them space to evolve. So while the special was rightly focused on these six cast members, the show’s supporting actors also deserved more than a small video appearance. For example, Tom Selleck was Monica’s boyfriend for quite a few episodes, but his only appearance was kept during the 'Lightning Round Game'. Maggie Wheeler a.k.a. Janice also received the same treatment. While there is nothing bad in showing the influence of FRIENDS on the world, getting celebrities to talk about it did not make much sense. Since the supporting cast members could have shed more light on what went down on the set, back in the day.

READ | FRIENDS Reunion: Chandler and Monica were just supposed to be a fling, reveal showrunners

The FRIENDS Reunion special is going to be a tear-jerker for die-hard fans for sure. Even though the cast members are significantly aged they are still the six FRIENDS you fell in love with. Lisa, Matthew, Matt, Courteney, David, and Jennifer's performances on the show get their due credit in this special. This special will make many audience members realise why these six FRIENDS will always 'be there for you, cause you have been there' for them too.

READ | FRIENDS Reunion: Here are 5 fan-favourite moments from this episode

READ | FRIENDS Reunion: Fans freak out as Jen-David confess to crushing on each other