Konkona Sen Sharma and Aditi Rao Hydari took to Instagram to pen notes on their experience for filming their segment Geeli Pucchi from Ajeeb Daastaans.


Aditi Rao Hydari and Konkona Sen Sharma shared screen-space in Netflix’s latest release Ajeeb Daastaans. They starred in the third segment of the film Ajeeb Daastaans titled Geeli Pucchi. Konkona took to her Instagram on April 19, to pen a note about her filming experience and extended her thanks to Aditi and the director of the film Neeraj Ghaywan for their cinematical contributions as well.

In the BTS picture shared by Konkona, she and Aditi Rao Hydari are all smiles for the camera. The crew of the film can be seen working in the background. In the lengthy caption of the post, she introduced the 'incredible team' behind the film. Talking about director Neeraj, Konkona wrote that he 'breathed life' into the characters she and Aditi played in the film. She praised Aditi by calling her 'the best co-creator and human being'. Her caption read as, "Thank you for all the love for Geeli Puchi! Here’s some of the incredible team behind the film! Our courageous director @neeraj.ghaywan who breathes soul into Priya and Bharti. I can’t wait to see what you will do next! @aditiraohydari for being the ethereal and complex Priya and the best co-creator and human being".

As soon as the post was shared, several of her fans could not stop gushing about her performance in the film. Aditi Rao Hydari also commented on the post by lovingly calling Konkona 'Koko' and Bhumi Pednekar, too, commented using a red heart. See their reactions below: 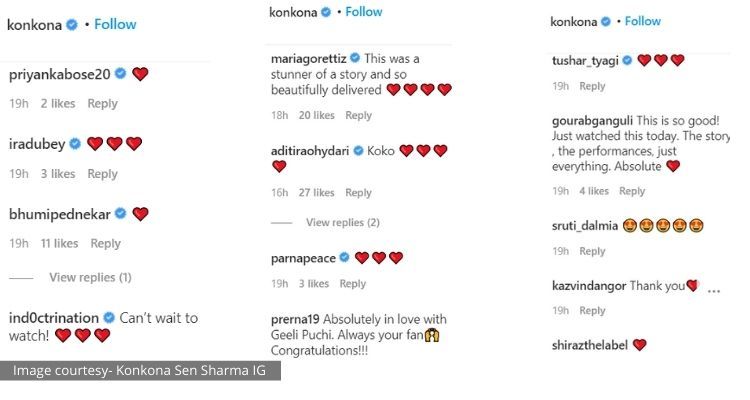 Echoing Kokona's sentiments, Aditi also expressed her thoughts on what it was like to shoot amid the pandemic. Sharing the same photo as Konkona, she wrote in the caption, "Thank you for this beautiful experience… From our zoom prep calls to finally shooting during the pandemic. One of the kindest, most thoughtful, sensitive teams ever. As actors, we go to work and bear our most vulnerable selves to so many people. It’s always precious to work with people who nurture us and give us the space to explore fearlessly... to be a child in a playground and forget the world... that is magic!". She also praised Kokona by writing, '@konkona, I cannot thank you enough for being so inspiring and super special inside out".

READ | The Falcon and the Winter Soldier: Is Danny Ramirez's Joaquin Torres the new Falcon?

Netflix's anthology film Ajeeb Daastaans released on April 16, 2021. Aditi Rao Hydari and Konkona Sen Sharma played the role of Priya and Bharti respectively. The segment showcases how their destinies change after meeting each other and how the unexpected unfolds before them.