'Penthouse: War In Life' Season 3 Ranked As The Most Buzz-worthy Drama Among 20 Others

South Korean drama 'The Penthouse 3' has been ranked as the most buzz-worthy drama of the week. Meanwhile, Kim Hyun Soo and Kim Young Dae reunite. 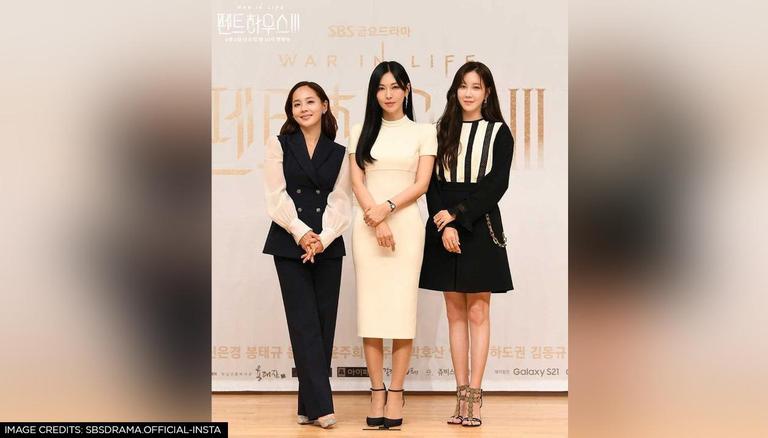 
Season 3 of The Penthouse: War in Life has ranked as the number one most buzzworthy drama. The series cast members, including Kim So Yeon, Lee Ji Ah, Choi Ye Bin, and Yoon Jong Hoon have been placed at the top ten of the list on the ranking of cast members who generated the most buzz, according to Good Data Corporation's official rankings. Also, the makers have released new still cuts from the upcoming episode that shows Bae Rona (Kim Hyun Soo) and Joo Seok Hoon (Kim Young Dae) reuniting after a long time.

Penthouse: War in Life Season 3 ranked as the most buzzworthy drama

As per Soompi, Good Data Corporation revealed its latest rankings of the most buzzworthy dramas and cast members. This week’s rankings are a result of data between August 30 and September 5 from various news articles, blog posts, online communities, videos, and social media for about 20 dramas that are either currently on air or about to go on air soon. The Penthouse: War in Life Season 3 rose to the top of this week’s ranking of the dramas, while the drama’s cast members Kim So Yeon, Lee Ji Ah, Choi Ye Bin, and Yoon Jong Hoon placed number 5, 8, 9, and 10, respectively, on the ranking of cast members who generated the most buzz.

Also, the makers of the show released new still cuts from the next episode that featured Bae Rona (Kim Hyun Soo) and Joo Seok Hoon (Kim Young Dae) sharing a sweet kiss. The Penthouse spins the story of a real estate and education war, a desire to be number one. It depicts the solidarity and revenge of women who turn to evil to protect themselves and their children. At the end of the first season, the series with 5.354 million viewers is placed at 9th rank in the Top 50 Korean television series per nationwide viewers. The series achieved the number-one position in all-channel mini-series, 21 times in a row from its first broadcast on October 26, 2020, to the last episode on January 5, 2021.

READ | If you loved 'Penthouse 2' finale, here are other Korean revenge dramas you must watch