Netflix has released the first looks from the forthcoming final hours of Stranger Things Season 4. The images show Hawkins' squad planning against Vecna. 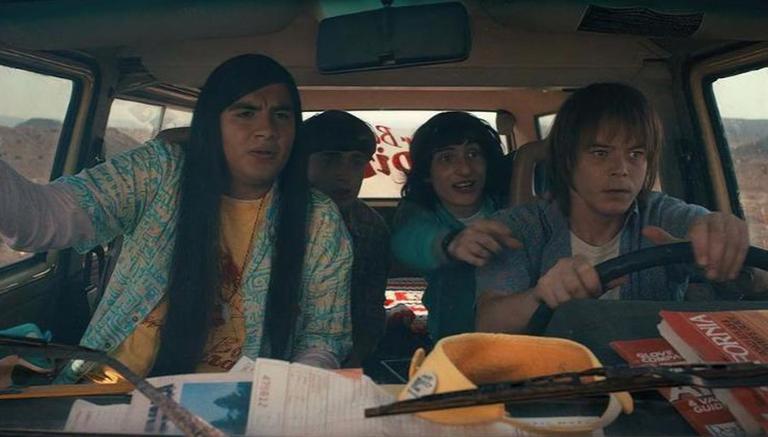 
Netflix has finally released the first looks from the forthcoming final hours of Stranger Things Season 4. The images feature the main cast of the show coming together for the season's conclusion as they are up to a plan against the terrifying villain Vecna, who has come up with a mission to destroy Hawkins.

The first few pics of the upcoming episodes of Volume 2 of Stranger Things see Eleven and Matthew Modine in intense avatars as they are seen discussing something serious in a laboratory and Max Mayfield and Lucas Sinclair could be hiding away, maybe from Vecna. One of the highlights was Nancy Wheeler, Dustin Henderson, Steve Harrington, Eddie Munson, Robin Buckley, Erica Sinclair, Max Mayfield, and Lucas Sinclair could be seen preparing a plan to fight against Vecna. Have a look at the pictures below:

The characters, who appear to be facing their own dilemmas, are holding strong against the major storm that they have to face to save Hawkins, while Hopper and his comrades are trying to escape snowy Russia. Sharing the pictures on its official Instagram handle, Netflix wrote, "your first look at the final chapters of Stranger Things 4."

In a recent conversation with Variety, the Duffer Brothers teased character deaths in Season 4 volume II, mentioning that they're 'very concerned.' Iterating that the kids are 'no longer kids', the creators revealed that 'everyone is in danger and things might not go well for them. Given the dangerous situations ahead, fans are also worried that someone is going to die in the Season 4 finale.

Stranger Things season 4 Volume-1 became the most viewed English-language series on Netflix by breaking the record for the biggest ever premiere weekend of Bridgerton 2. The sci-fi series, created by the Duffer Brothers, returned to the streamer after a gap of three years with seven episodes. The second volume is set to release on July 1 with two episodes.

WE RECOMMEND
Netflix launches new Mystery Box: What is it, how to use? All details here
'Stranger Things' stars say characters should be killed off in S5; 'One of us will die'
'Stranger Things' creators intended to kill off Steve Harrington in S1; 'When he comes...'
Netflix announces 'Squid Game Season 2' with teaser featuring red light-green light doll
Stranger Things 4 Twitter Review: Fans give their verdict on Netflix series' new episodes