The latest episode of 'The Handmaid’s Tale' season 4 left fans concerned about Janine as she gets lost during the bomb attack on Chicago city. Read on - 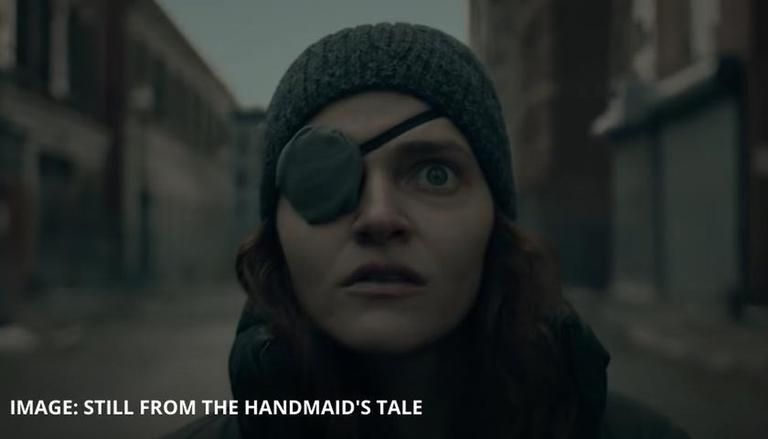 IMAGE: STILL FROM THE HANDMAID'S TALE


Hulu's popular show The Handmaid’s Tale season 4 latest episode shows June searching frantically for Janine amidst the rumbles of the Chicago city after a deadly bomb attack. The episode ended on a cliff hanger making fans of the show curious and worried about Janine's future on the show.

Throughout the episode, viewers see how June and Janine separate in this new situation. Janine has adjusted much quickly and has even begun to dream of being a parent again. This is precisely what she tells June when she tells her that it is time for them to leave. However, she does not force Janine to follow her in her quest to find Mayday. So she tells Janine goodbye and leaves. When June and Janine are fighting to survive, the top commanders of Gilead, including Commander Lawrence and Commander Nick Blaine have come up with their own sinister plan. They plan to drop bombs in Chicago and 24 hours later, they want to call a ceasefire in an effort to begin trade talks with Canada.

Chicago is emptied on the day the commanders conspire to drop the bombs. Though it is the same day that June decides to pursue her own journey. As she walks on the empty streets, she begins to get a frightful feeling about the place and Janine arrives out of nowhere. Turns out, she didn't want to be left behind and will accompany her fellow handmaiden. Unfortunately, though, this delicate moment is split apart by bombs falling from the sky. Something that June realises too late and the two of them are caught in it. At the end of the episode, June cries out to search for Janine, but there is no response. With tears in her eyes, she tries to see through the ash and all the devastation that has fallen upon the city of Chicago.

Fans reaction to the cliffhanger

Fans were left worried about Janine's fate and expressed their worries on Twitter. Here are some of the fans' reaction.

Janine better be alive 🤬 hate how you get a cliffhanger for good and bad. Good for the reunion but bad bc Janine wasn’t part of it 😭 #HandmaidsTale pic.twitter.com/vS2ewW0lIu

Ok but that ending of #HandmaidsTale it wasn’t a dream right?! And is Janine ok?

I feel like this could have been the final season with Moira showing up. Janine is more than likely dead. June can go to Canada and they can trade the Waterfords+baby for Hannah to wrap it up. #HandmaidsTale

Y’all aren’t slick I will not be distracted with June and Moira’s reunion, where the hell is Janine?!#HandmaidsTale

IMAGE: STILL FROM THE HANDMAID'S TALE