Wyatt Pike has recently opened up about his exit from American Idol. Wyatt shared a statement on Instagram explaining his exit. Read ahead to know more.


Wyatt Pike has recently opened up about his exit from American Idol. Two days after the news broke that he would be dropping out of the competition, Wyatt shared a statement on Instagram explaining his exit. He revealed that he had to drop out of the show due to personal reasons. Read ahead to know more about why did Wyatt Pike leave American Idol.

Taking to Instagram, Wyatt shared a picture of himself and penned a note in his caption. His note read, “I had to leave the @AmericanIdol competition for personal reasons but am so thankful I get to play music for the rest of my life. Fellow contestants - miss you all, good luck! Thank you to everyone for your support… do stick around for more musical things soon!” Many fans and followers were upset with Wyatt’s decision but also said that they would continue to support him in all his future endeavours. One fan wrote, “Take care of yourself first Wyatt.... as you said, your music will always be there. Take care.” Another said, “I’m sorry you had to leave, sending my prayers to you, your family, I hope everything gets well soon. I still can’t wait to see what the future has in store, I know you will still make a difference.” “Sad we won’t get to hear you perform on idol, but looking forward to YOUR music that will be coming out. So much artistry and so much talent. Best of luck and hope all is well,” one commenter wrote. Take a look at Wyatt Pike's Instagram post below. 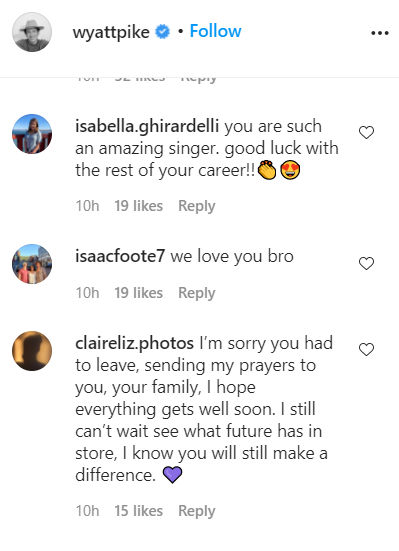 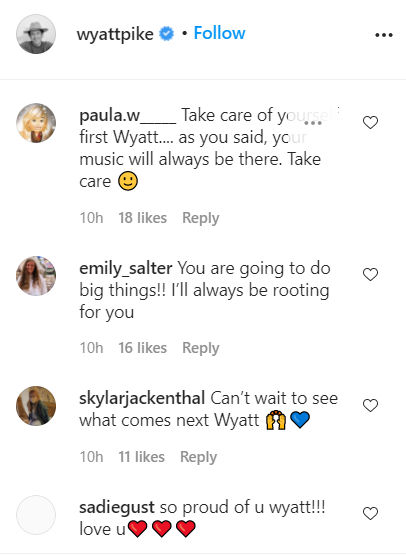 On episode that aired on April 12, host Ryan Seacrest shared that Wyatt Pike was leaving the competition. However, Pike had just made it into the season's top 12 competitors. Ryan said, "Before we get to the results, I have to tell you that finalist Wyatt Pike will not be competing in the competition. He had to drop out, but we wish him the very best." In his last appearance on the show, Wyatt sang a cover of Use Somebody by Kings of Leon, which garnered praise from the judges.