800kg Walrus To Get 'floating Sofa' After Sinking Boats, Damaging Vessels Worth Thousands

A Walrus named 'Wally' weighing around 800 kilograms has wreaked havoc on smaller boats by attempting to board them; to get a floating pontoon. Read more here 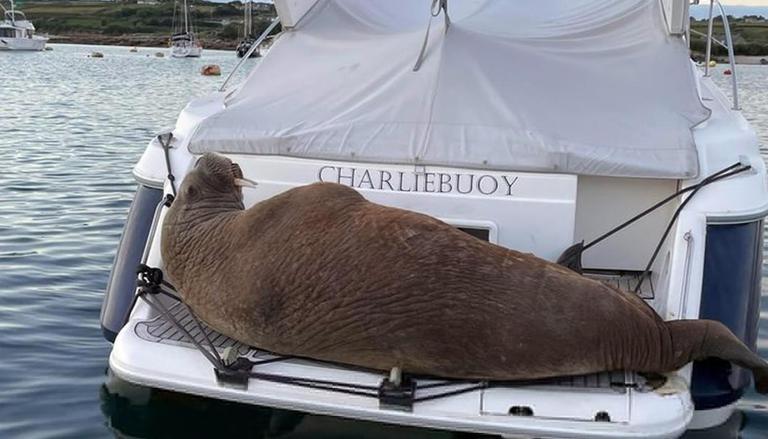 
A Walrus named 'Wally' has become a source of concern for a number of boaters in Ireland. The Arctic walrus is a large animal, weighing in around 800 kilograms, and has wreaked havoc on smaller boats by attempting to board them. According to accounts, the enormous creature has sunk two boats off the coast of West Cork and damaged other vessels worth thousands of euros.

Wally prefers taking a break on land or in tiny boats

According to Wales Online, Seal Rescue Ireland (SRI), wildlife rescue service, has made a request for the donation of a disused flotation cushion that will allow the walrus to rest. It is said that the massive animal prefers to take a break on land or in tiny boats. As a result, during the walrus's six-week stay in the Isles of Scilly in July, the British Divers Marine Life Rescue (BDMLR) in the UK assisted in the installation of a floating pontoon for him.

BDMLR has now presented their plan to Melanie Croce, director of Seal Rescue Ireland (SRI). She stated that they have never done anything like this before, so they are learning a lot as they go along. BDMLR is assisting them, and they are also collaborating with Orca Ireland and the West Cork Animal Welfare Group. If Wally is ever seen in the region again, the floating sofa will be placed in the harbour. Their goals are to create a safe place for the Walrus, to efficiently monitor it, to protect the creature from disturbance, and to avoid property damage, she added. Wally's natural behaviour should be allowed to continue, according to Croce, but SRI will intervene if human interactions with the animal threaten to distress it.

People should maintain 100 metres of distance from the Walrus

People should stay at least 100 metres away from the walrus and appreciate it from afar, according to SRI. The wildlife rescue service team has requested anyone who sees the animal, to call the rescue organisation instead of posting the location on social media. The walrus will have to swim a considerable distance back to Iceland or Norway, according to Croce, but sea ice, which the walrus needs to rest on, has "significantly receded" during the summer months. She went on to say that if the walrus travelled today, he would have a "very long swim," and that he would require a place to rest.

WE RECOMMEND
Tom Hanks' customized Airstream trailer from the 90s is up for auction
Ahead of Blue Origin's historic takeoff, Wally Funk says 'I've waited long time for this'
Rare arctic walrus spotted in Ireland, likely drifted away after falling asleep on iceberg
Dutch teen who flew to space with Jeff Bezos 'never brought anything from Amazon'
WATCH: Jeff Bezos' video from 2000 made people laugh when he spoke of exploring space