Bretman Rock has posted pictures from his photoshoot, Indians didn't wait to point out the uncanny resemblance between him and Chota Pandit from Bhool Bhulaiyaa 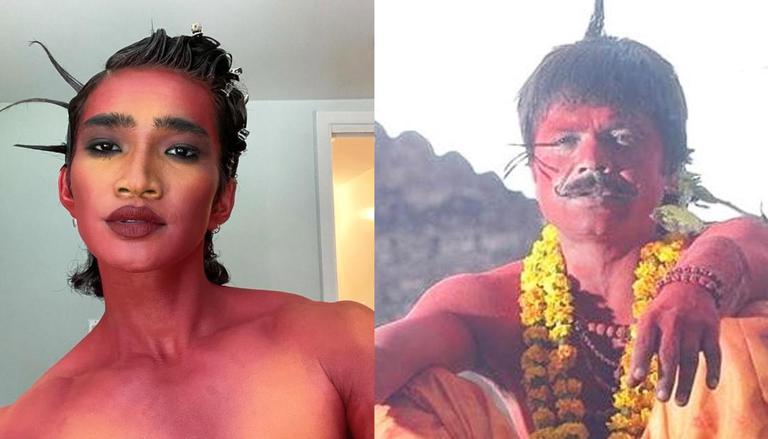 
Filipino beauty influencer Bretman Rock's photoshoots are extremely unconventional and sublime and he has gained global attention for the unique looks he features in them. His style is always appreciated on the Internet, but this time, he has become a part of a meme. The 23-year-old shared pictures from his photoshoot on the cover of King Kong Magazine on social media, with the caption, "King Kong Magazine Issue 12." However, the Indians didn't wait to point out the uncanny resemblance between him and a character named Chota Pandit played by Rajpal Yadav from the 2007 Bollywood movie Bhool Bhulaiyaa, which was released 15 years ago.

In Priyadarshan's 2007 psychological horror-comedy Bhool Bhulaiyaa, the character of Rajpal Yadav, Chota Pandit is exposed to the ghost, which eventually drives him crazy as he becomes more mentally unstable by the day. Later, he covers himself in crimson paint, wears garlands around his neck, places incense sticks over his ears, and does hair in antenna style.

Bretman's post has received over 5,000 retweets and approx 70 thousand likes. His fans were appreciative of the unique photoshoot. However, many shared memes spotting similarities between Bretman and Rajpal Yadav from Bhool Bhulaiya to poke some fun.

I love @bretmanrock but this just reminds me of.. pic.twitter.com/23QRLaK5Qp

Bretman Rock thought he did something pic.twitter.com/8wLf9GQYyE

pls i love @bretmanrock but the resemblance is uncanny 😭😭😭💀💀😭😭💀😭💀💀 pic.twitter.com/X5rmnUuTeX

Bretman Rock Sacayanan is a Filipino social media star and beauty influencer who rose to stardom as a YouTube and Vine creator. He rose to fame after one of his contouring videos went viral in 2015. Rock is well-known for his cosmetic tips and his witty take on life. Rock appeared in his own reality TV show, MTV Following: Bretman Rock, in 2021, which gave viewers a closer glimpse into his personal life.

READ | Video of cat hiding inside cupboard and slowly adjusting in it goes viral, netizens react

Accomplishments and accolades of Bretman Rock

Rock has garnered numerous prizes and accolades for his efforts on social media, including a People's Choice award for "Beauty Influencer" and an MTV Movie and TV Awards award for "Breakthrough Social Star" in 2021. In 2017, he was named one of Time's "30 Most Influential Teens," and in 2018, he was named to Forbes' "30 Under 30 Asia – Media, Marketing, and Advertising" list. At the 45th People's Choice Awards in 2019, Rock took home the Beauty Influencer award. He was a nominee in the Shorty Awards' comedy video category in 2020. Rock was named to Variety's 2020 Power of Young Hollywood list 2020.