Caught On Cam: California Man Makes Himself A Pizza While Robbing Restaurant, Arrested

A 25-year-old man named Oscar Alexander Sanchez stopped to make himself a pizza in between robbing a restaurant, says California Police.

A 25-year-old man named Oscar Alexander Sanchez stopped to make himself a pizza in between robbing a restaurant, says California Police. Sanchez has been accused of stealing $500, beer, electronics and breaking into Big Pizza Slice before running off in a delivery car. As per the reports by indy100, Sanchez is in custody currently.

The Fullerton Police Department took to its official Instagram handle and uploaded a CCTV footage of Sanchez making a pizza. Terming him as ‘Hamburglar’, the police department wrote, “On Sunday morning a local pizza shop was broken into. This guy had the audacity to not only break in, but also steal their tablets and cash! Before he stole their delivery car to leave, he couldn’t resist his craving and helped himself to making a pizza pie! FPD identified, located and arrested him”. In the end the department made a sarcastic remark by saying that the jail doesn’t serve his favorite meal. In the video, Sanchez can be seen flattening the dough for his pizza base.

Speaking to ABC, manager Rafael Calles said that he was trying to make something for himself as he was hungry. He further added that this is for the first time in seventeen years of business that such an incident has taken place. Terming it as a 'big hit', he said that they had to close the store, make a report, call service to restore the service for the store so that they could keep in operation.

On watching the video uploaded by the Police Department, netizens were left stunned. One person wrote, "Big Slice and Leadbellys. Support our Local Small Businesses. Thank you FPD for sharing this story ". Praising the police, another person wrote, "That’s unreal. So glad you got him and you’re all okay. Excellent job". 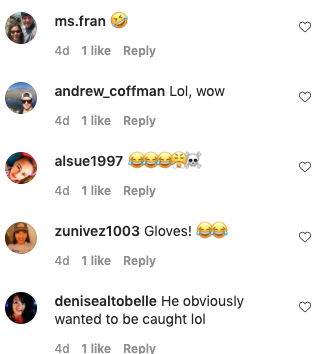