The viral video opens up to show Amaury Guichon's creation of a chocolate chessboard cake. The video of his recent creativity has garnered two million views. 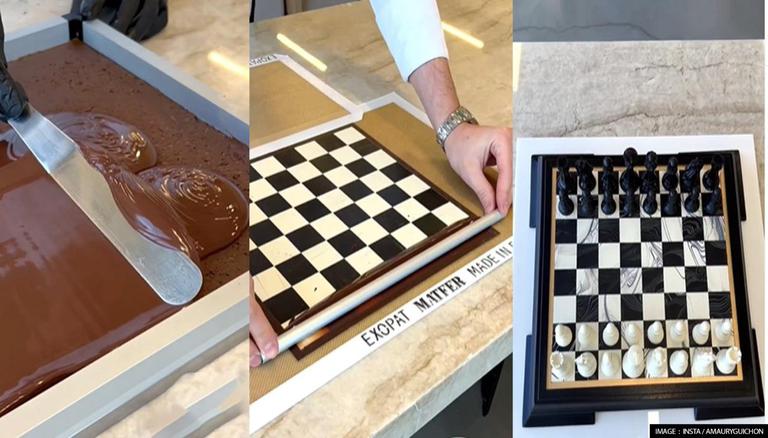 
The Internet is a treasure of the unique talents and skills of people. Recently, a pastry chef has created something that will surely amaze netizens. The creative chef is Amaury Guichon, whose Instagram account is filled with his unique creations. The video of his recent creativity involving the game of chess has gained traction on the internet.

The viral video opens up to show Amaury Guichon's creation of a chocolate chessboard cake. As the video progressed, it showed the chef setting up the chessboard with the use of different food items like syrups. After creating an almost identical chessboard, he makes every single piece of the game, and gives it the right colour and finish.

The chef did not restrict himself to just creating the delicious and stunning cake, but he also played with his creation. Also, the Amaury Guichon's pastry academy took to the comment section inviting interested people to learn Chef Amaury’s techniques and recipes by visiting their website. Sharing the video on Instagram, the chef wrote, "The Chessboard Game! A delicious triple chocolate cake in disguise. You only get to eat if you win!".

Netizens say, 'This is incredible'

The trending video has received around 24 million views since it was shared. The viral news has also garnered several likes and comments. "Honestly was such a masterpiece I didn't like watching it being cut", a user wrote. The second user replied, "Mind-blowing as usual!". The third user expressed, "Now you truly can eat your opponent’s chess pieces when they’re not looking!"

This is not the first time that Amaury Guichon has stunned netizens with his creativity. Previously, a trending video showing of an eight-foot-tall chocolate giraffe had similarly become a talking point. The video showed him creating different parts of the statue. He was then seen assembling the parts to give shape to his creation. He also explained that it took him seven days for making the 8 ft tall chocolate giraffe. The chocolate giraffe was 8.3 ft in height while it weighed 160 lbs. Chef shared that it was his biggest creation. The viral video has accumulated around 65.8 million views.