Rare Allosaurus Dinosaur Skeleton Auctioned For €3 Million In Paris; Here's How Old It Is

The skeleton of the exceptional Allosaurus was sold at an auction in Paris on October 13 at a price of 3 million Euros. The piece is considered to be 10m long.

The skeleton of the exceptional Allosaurus was sold at an auction in Paris on October 13 at a price of 3 million Euros. Considered as one of the largest specimens of this species, the 10 meter long piece was auctioned at ‘Binoche et Giquello’ auction house. Belonging to the Upper Jurassic period, the skeleton was dug up in the US state of Wyoming. According to the reports by AP, auctioneer Alexandre Giquello described it as. "One immediately thinks of Jurassic Park".

As per the official website of Binoche et Giquello, adult Allosaurus were about 8.5 meters long. The largest allosaurus was kept in the American Museum of Natural History in New York and was considered to be 9.7 meters long. Therefore this specimen is one of the largest known allosaurus till date. The site says, “Superb specimen of Allosaurus sp. of exceptional size, showing obvious signs of trauma on three ribs probably due to clashes with conspecifics or prey”. During the display, the missing bones and segments were replaced by reproductions modelled by a team of professional paleontologists.

Read: New York: One Of The Largest Known T-rex Skeleton Set To Be Auctioned Next Month 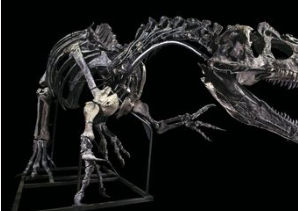 The large carnivorous dinosaur can be described as a creature having a large skull, a short neck, a large rib cage which contributes to the barrel-shaped chest, small three-toed forelimbs, large powerful hind limbs, a long, heavy tail and knife-shaped teeth. Various studies on the creature suggested that Allosaurus could reach at the speed of 30 to 55 km per hour. Describing the creature, the official site said, “Its skull had a peculiar appearance, with a pair of bony ridges like horns on top. The bone structure of his skull was reduced to its bare minimum in order to reduce his total weight, and probably help with thermoregulation”. However, the jaws were very well developed pointing towards a strong sense of smell.