The whale video was shot by a drone on Tuesday when the lady surfer was on her paddleboarding session off the coast of Puerto Madryn, Argentina. 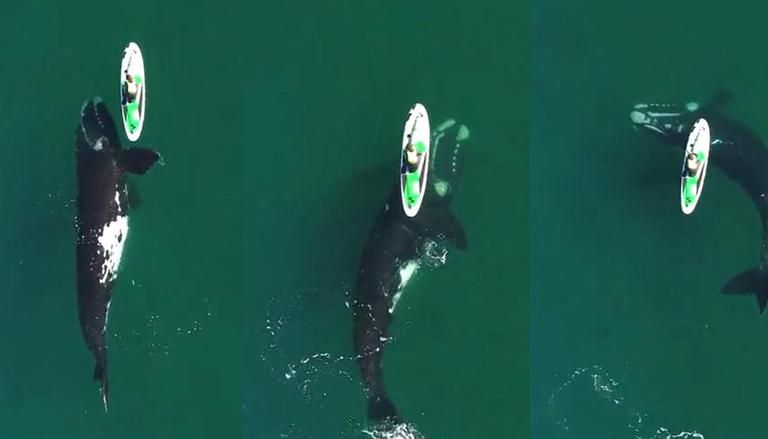 As per reports, the whale migration season in Argentina's Patagonia region begins from May and lasts up to December. During this time, these curious mammals sometimes swim up to the shores. However, such human contacts are the rarest of events that thrill everyone, AP mentioned.

The video was shot by a drone on Tuesday when the lady surfer was on her paddleboarding session off the coast of Puerto Madryn. The giant Southern Right whale swam towards the tiny paddleboard, (compared to its size) and playfully casually pushed with its right fin. Then it waited and observed the movement of the bright yellow paddleboard while swimming below it. "They are rare moments," Oscar Comes, a local watersports tourism operator told AP. However, such human contacts are something that is prohibited," he added. "It isn't like you can go in a kayak, standup board, a boat, or whatever, to look for the animal," he told. Take a look at the stunning and adorable video:

'I think today I made the best whale drone video of my life.'

The video was uploaded by photographer Maxi Jonas on Twitter. "I think today I made the best whale drone video of my life," Maxi wrote on Twitter in Spanish. The 54-second video of the pleasant unforeseen interaction went immediately viral after it was posted on social media. The video amassed over 2.3 million views and was retweeted over 34k times. It also received over 168k love reactions and nearly 3k comments.

Really cool - what an experience. Good thing it wasn’t a killer whale though - the Kayak looks like a vanilla wafer with a soft center.

Love that little, gentle nudge from the whale. What a remarkable encounter!

Yo I probably would need some tissue after that and I'm not talking about crying either.

While most were amazed at this rather rare yet lighthearted encounter, many were touched by the whale's gesture. "Love that little, general knowledge from the whale. What a remarkable encounter!" wrote one user. Some users also mentioned how fascinating a whale encounter is. "I want whale watching in Cape Cod a couple of weeks ago, and it was an awesome experience but this looks scary and wonders at the same time," another user wrote.