A nearly 1,000 foot tall ‘Over The Top’ Rubik cube that broke the Guinness World Record was made by Dutch designer 'Oskar van Deventer or the Oskar Puzzles. 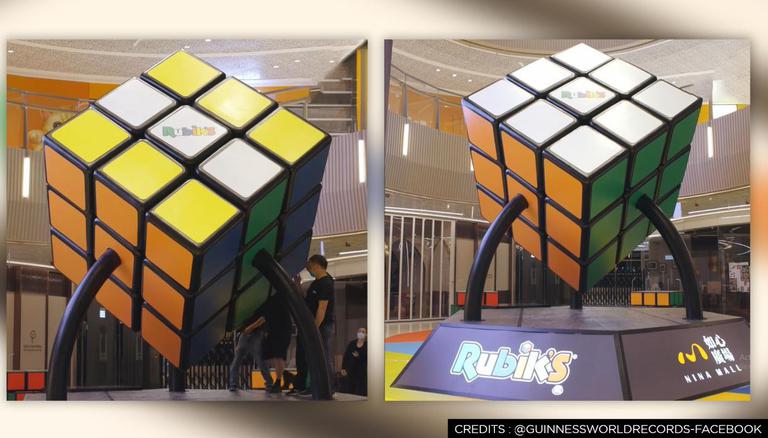 
World’s largest Rubik’s Cube measuring 2.503 m x 2.505 m x 2.502 m was unveiled by Nina Mall in Hong Kong. The gigantic cube left the viewers awestruck as it comprised a vast span of 67-square-foot on each side and needed several people to move from one spot to another. The footage of the record-breaking 1,000-foot-tall Rubik's Cube was shared by the Guinness World Records (GWR) on its website and the social media handles. It achieved the title of the largest Rubik's Cube ever on Earth in March 2018. Looking at its exorbitant size, one is only compelled to think about the number of people it may require for solving this mega-size Rubik cube.

Reportedly, this  66.9 quinquagintatrecentillion ‘Over The Top’ cube was made by the Dutch designer  'Oskar van Deventer or the Oskar Puzzles. The company priced one single coloured column of the cube, that is part 1 of the 7 at $312.46 on Shape Ways. “Over The Top is a world-record 17x17x17 Rubik's Cube. It makes quite pretty patterns. It can take many, many hours to solve,” explained the manufacturer. Furthermore, Oskar informed that the cube was first presented live to the world at the New York Puzzle Party Symposium in February.  While the hefty cube did break the world record with respect to its size, there’s yet an official record to be broken for solving the actual mammoth puzzle.

A puzzle legend named Kenneth Brandon [known as RedKB on YouTube] however did share the method to solve the world’s largest Rubik cube which interestingly took him nearly 7.5 hours. Earlier, he shared a time-lapse video of scrambling the replica of the 17x17x17 Rubik’s Cube in a somewhat smaller size. According to his video, it took RedKB almost 5 days to solve the puzzle which he called “very time-consuming.” The puzzle legend started at the center, then eventually solving his way on the sides. “The way I’m solving it is using the ‘reduction method,’ and basically you reduce the cube into a three by three, and then you solve the three by three,” he explained. "The way you solve a 17 by 17 is just like you would a seven by seven, or a five by five. If you can solve one of those then the 17 by 17 isn’t that hard, but it is very, very tedious,” he added.

Last year, a Japanese toy company Mega House introduced the world’s smallest Rubik cube just about 0.39 inches tall which was priced at $1700 [180,000 yen]. It was manufactured in collaboration with a metal precision processing company Iriso Seimitsu Co. Ltd. each coloured side of the tiniest cube ever seen measured only 0.10 inches. The cube was displayed during the 40th-anniversary exhibition at the Hungarian Cultural Center in Tokyo in November 2020.