'Instagram Vs Reality': Model Called Out For Pretending To Be In Business Class On Flight

“Dubai model exposed by co-passengers after she posed in business class cabin, posted photos on Instagram then returned to her seat in economy," a post read. 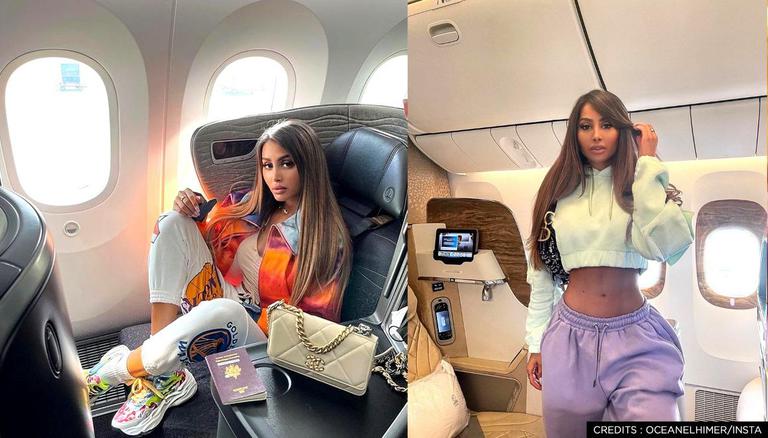 
A French Instagram model is being mocked online after her business class flying faux onboard an Emirates flight was exposed to the public, sparking debate about the augmented reality and perceptions built around Instagram. The 27-year-old Instagram influencer originally from Bordeaux, but a resident of United Arab Emirates city Oceane El Himer posted a picture of herself in olive green top and purple sweats carrying a Christian Dior bag as she posed for the camera inside the business class on the flag carrier of the United Arab Emirates (UAE).

Oceane El Himer wrote on her Instagram handle, “Next Stop – Monaco. Je fly toute la night,” that roughly translates to “I fly all night” as she posted her travel picture to the making her 847,000 followers envious of her luxury lifestyle.

Although, in a strange twist of the event, a separate picture of the Instagram influencer Oceane El Himer emerged on Twitter, wherein she was seen crammed inside the economy class of the plane along with other travellers as she sat in the same attire in the overcrowded plane compartment. “Dubai model exposed by co-passengers after she posed in the business class cabin and posted photos online then returned to her seat in the economy before takeoff,” read the caption to the tweet. After the model was busted by a fellow co-passenger, a slew of remarks followed, with most commenters denouncing the fake ‘influencer culture’. This also prompted the Instagram model to turn off her comments.

According to NYPost, the commenters flooded the French influencer’s post saying,  “If you’ve ever been out this way, this sums up the culture.” Another wrote, “A bunch of people pretending to either be rich, a model, or an entrepreneur. 90 percent of the people in that city pretending.”Meanwhile one other quipped, “Crazy how ppl go to hell and back to impress people they don’t know people who apply nothing to their life.”

Model says 'no shame in travelling in Economy class'

Himer although appeared on her Snapchat, defending her picture as she said that there’s “no shame in traveling in eco class.” “I took several flights to arrive in the south, including one in eco class,” she wrote. “Took a picture and I accepted. I fully assume the fact of traveling in eco class, I’m not the type of girl who likes to show her money. Yes, I traveled in eco and in business. And so?”She lashed out.