A New Zealand newsreader, Oriini Kaipara, has made history by being the first person to anchor a prime time news show with a face tattoo. 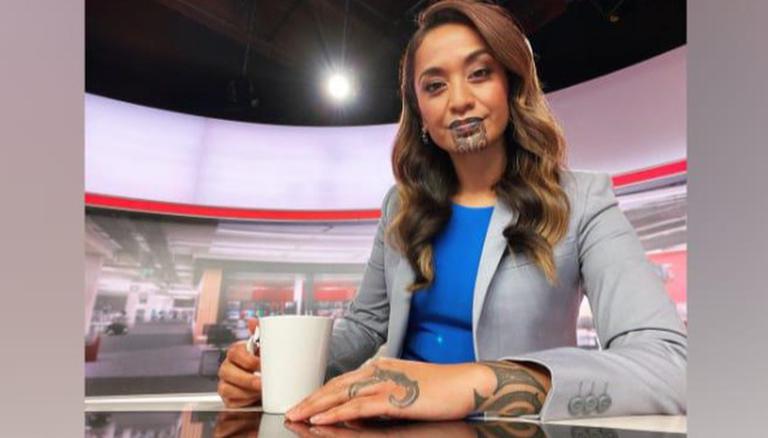 
A New Zealand newsreader has made history by being the first person to anchor a prime time news show with a face tattoo. Oriini Kaipara has a traditional Mori woman's lower chin tattoo. The 37-year-old believes that being able to read the 6 p.m. news has fulfilled a lifetime desire for her, and she hopes to inspire other Maori women.

She remarked in an interview with Stuff, a New Zealand news website, "It's really exciting. I'm really enjoying it. I'm not speechless, but it's a buzz. I am proud of how far I've come in being able to anchor 6pm right now. It's definitely a step forward, and a step-up. If there was a goal for me, it would be anchoring prime time news, and that's happened."

She further praised her team at Newshub, adding that she doesn't feel the pressure as much as she faced at the beginning of her career in journalism. "But that comes with doing the hard yards, and then actually realising it and doing it is really exciting,” she added. The 37-year-old and mother-of-four from Auckland said the experience fulfilled a lifetime goal, and she hoped she was the first in a long line of Maori women with traditional tattoos reading the news.

Kaipara's Maori marks have made her a fan favourite

Kaipara made headlines in 2019 when she filled in for TVNZ's midday broadcast and became the first person with face tattoos to provide mainstream news. She does packages for the main bulletin on a regular basis, and her Maori marks have made her a fan favourite. Kaipara is bilingual and descended from the Thoe, Ngti Awa, Twharetoa, and Ngti Rangitihi tribes, which she proudly demonstrates in her job as a notable journalist.

"I'm very much aware that I'm the first [with moko kauae] to anchor a six o'clock primetime news bulletin. That is always at the back of my mind, that every step I make is like breaking through a glass ceiling. It's breaking new ground for us as Māori, but also for people of colour. Whether you've got a moko kauae or not," she expressed, Stuff reported.

T moko, or Mori face and body tattooing, symbolises the wearer's familial ancestry and social standing. Moko was a rite of passage for Mori women, marking the transition from childhood to maturity and symbolising a personal development. In January 2019, she posted photographs on social media of herself surrounded by family while a tattoo artist inscribes her moko kauae.

READ | Google 'Year in Search 2021': Tokyo Olympics, lockdown among top trending words in India
READ | NFT among the top trending Google searches in 2021; here's all you need to know about it