8-year-old boy placed sign advertising “Pokémon 4 Sale” on the side of the road to sell his cards collection for fundraiser to get his sick puppy treatment. 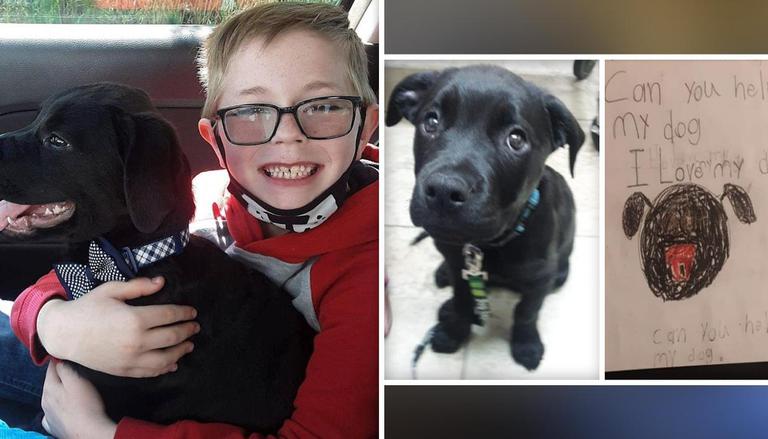 
An eight-year-old boy kid in Virginia, US received a surprise gift from Pokemon after he sold his own special collection to raise funds for the treatment of his little, black sick puppy Bruce. Bryson Kliemann of Lebanon, a diehard Pokémon fanatic had earlier this month gone viral after he was spotted sitting on a makeshift sales desk organizing his playing cards for sale to raise money for his puppy after his mother Kimberly Woodruff, had to rush him to Southwest Virginia Veterinary Services.  Kliemann’s puppy wasn't “coming out of his cage”.

Woodruff told local broadcasters that otherwise extremely active a puppy he usually is, the dog fell lethargic that day and was just not doing good. Bruce was diagnosed with Parvo, a contagious dog virus and the family needed nearly $700 in order to afford his medical treatment and could not afford to lose the dog. But it was also the amount the family couldn't afford to pay. "It made me kind of sad because usually my brother and sister play together and I don't have anybody to play with. So, I usually play with him(Bruce),"  8-year-old Bryson said in a live broadcast. The little boy knew that he had to act promptly. So he placed a sign advertising “Pokémon 4 Sale” on the side of the road to sell his Pokémon cards collection. The boy said that he knew everybody likes Pokémon cards.

Bryson’s mother was astonished to learn about her son’s effort. She set up a GoFundMe page to raise nearly $800, but with the donations reached a whopping $1,900. On Monday, Pokemon sent a rare pack of cards to the boy that the company first released in 1996. The company that manufactures the Pokémon Trading Card Game also dispatched a personalized letter to the kid, according to WSLS 10. It read: “Hey Bryson, we were so inspired by your story about selling your cards for your dog’s recovery, these are some cards to help you replace the ones you had to sell.” Bryson’s puppy has been happily recovering now with few more vaccinations to go.

READ | What happened to Mr Potato Head? Find out is the Hasbro company toy getting cancelled
READ | 'To infinity and beyond': US airlines staff unites kid with his toy, wins internet
READ | Philadelphia zoo's endangered leopard plays with kid and her plush cat toy, internet melts
READ | Lego announces 'Everyone is Awesome' toy set ahead of LGBTQ Pride Month