After a groovy video of Kerala medics dancing on ‘Rasputin’ took internet by storm, students of the same college have shared another video that has gone viral.


Days after a groovy video of Kerala medics dancing on the popular soundtrack ‘Rasputin’ took the internet by storm, students of the same college have shared yet another dance clip that has now gone viral. In the video, the medicos from Kerala are seen dancing enthusiastically to Boney M’s classic song. The MBBS students are from Kerala’s Thrissur Medical College and their clip has garnered popularity among netizens for its uplifting vibe.

The video was inspired by another similar clip featuring Naveen K Razak and Janaki M Omkumarare. The dance clip is shared on the Facebook page, Aikya College Union 19-20, Thrissur Medical College. The caption of the post read, “If the intention is to hate, the decision is to resist #resisthate”.

The recent clip is in response to the communal hate that Naveen and Janaki’s video received. While some internet users had welcomed the “Stylish dancing medicos”, some netizens gave the video a communal twist advising Janaki's parents to 'protect her from Razak' - alleging 'Love Jihad'. Love Jihad is a term referring to an alleged campaign by Muslim men to convert Hindu girls under the pretext of love.

But the latest clip has garnered love and support from several internet users. While one user wrote, “Today's kids are good... Great Thoughts,” another added, “This is how Kerala remains as Kerala. Kerala is a Balikera mountain for all poisons. And it will continue to be. Great Job”. “Big Salute to the daring generation who stand against a few individuals and challenged the fundamental rights and dignity of the people, Blast and March steadily,” added third. “You people enjoy your dancing, be dedicated to your profession, be good human beings and be there for the needy, that's all that counts. Let barking dogs bark....do things that make you happy,” wrote fourth. 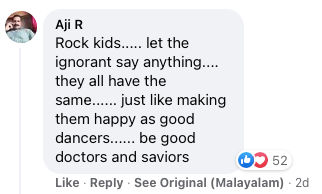 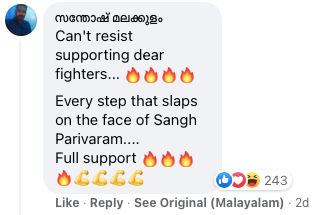