The couple were engaged in an argument on the balcony when they fell on the ground. The terrifying incident was caught on camera by someone passing by 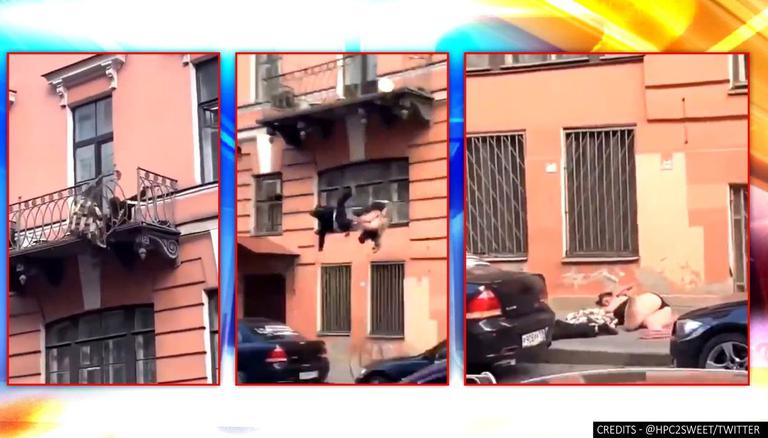 
A couple engaged in a fight fell through their balcony railings. The couple living in St. Petersburg, Russia fell from a 25-feet balcony were seriously injured. The terrifying moment that was caught on camera by a passerby features Olga Volkova and Yevgeny Karlagin fighting with each other on the second floor of their home in St. Petersberg.

Couple engaged in a fight fall from their balcony

The video shared by a Video Daily page on YouTube shows the couple struggling on the balcony of their home on May 29. The couple while arguing smashed into the balcony railings which suddenly gave way and caused the pair to fall onto the footpath, reported Daily Mail. Olga Volkova and Yevgeny Karlagin were rushed to the hospital and were undergoing treatment after sustaining injuries but they were not in a critical condition. Watch the video here:

The horrifying incident was caught on camera by someone passing by on the road when the dispute broke out. As per reports, the couple were seen arguing on the balcony of their home. Eyewitnesses said that they were walking on the road while filming the historic street view. They noticed the couple arguing and began to shoot when this incident happened. After they fell on the ground, someone with medical experience checked their pulses  and said that they had both survived. As per local reports, the authorities in St Petersburg have now started investigating the incident after the couple reportedly suffered broken limbs.

#BehindtheScenes of a spot in the #stadiumstampede match at #AEWDoN #AEWDoubleorNothing. pic.twitter.com/lfcWKJtKGl

The video shared on Twitter has got more than 1.3K views and several reactions. One user commented, "I need to know the story behind this now lol". Another user wrote, "Glad to hear it that looked close to disaster".

yeah, the sidewalk broke their fall

Glad to hear it that looked close to disaster