Snake Tries To Strike At Car, Then Slithers & Crawls Inside It; Watch Terrifying Video

A python snake attempted to get inside a car's engine while trying to get respite from the cold weather. The video of the snake went viral on social media. 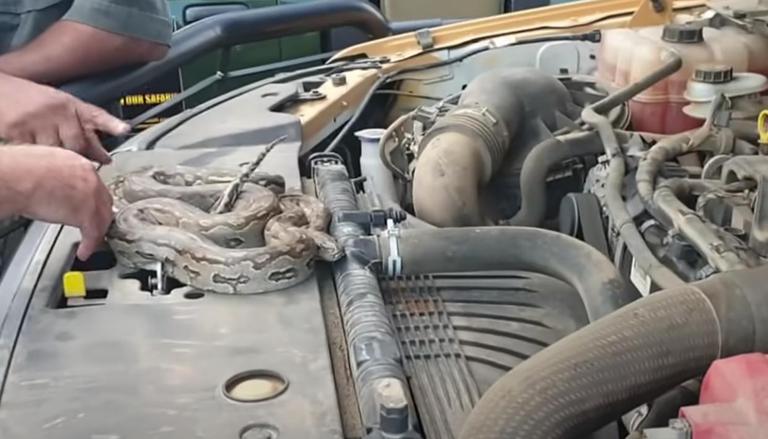 
In a video posted by the YouTube channel Latest Sightings, we can see a nervous python slithering inside the car of the guests at the Kruger National Park, South Africa. The video was posted on July 7 and has gone viral on social media. The video was captured by Raj Chinsamy, who is a 40-year-old natural guide for Kruger Pride Safaris. During these months, the weather can get quite cold in South Africa and as snakes are cold-blooded, they get attracted to heated bodies. Due to this reason, it is seen in the video that the python first rushes underneath the car and then creeps into the engine to find respite from the cold atmosphere.

A guest at the national park, Kerry told LatestSightings.com, “We were on a game drive in the park and I stopped to talk to Arun from Legend Safaris who had stopped his vehicle in the road. A python was slithering in the road and moved underneath the vehicle and then into the engine!” “Jan, who is also a guide, was on the drive with me and offered to help Arun remove the python from the engine. At first, it was only 2 vehicles and within a few minutes, a couple of cars had parked nearby to watch the action unfold. The python was pulled out reluctantly and then released back into the bush. After the sighting, we were all in high spirits as pythons are not often spotted in the park!”

The video has already been played more than 137,000 times and has received 822 likes. It received multiple comments from concerned and relieved people as one Youtube user commented, “Hats off to the man's calmness.” Another user commented, "Glad they took care of the python." One user was concerned that the driver did not turn off the engine even after the snake tried getting inside. The user commented, "Why did they not shut down the engine, that could have ended so badly for the python !!!"