Her son can be seen arguing repeatedly disrespecting her, so Texas mom quietly takes him and his brother to the restroom where she asks the boy to do sit-ups.

A Texas mother ordering her son to do push-ups after he repeatedly talked back at her has captured the attention of the internet. Shared by a user named Molly Wooden on Facebook, the post talks about a woman named Nicole Quinn who Molly says was seen tutoring her ten-year-old son for being indisciplined discreetly in the bathroom.

In the post, Molly wrote: “To the woman in the Hobby Lobby bathroom. If my hands weren’t full of children, I would have applauded you. As your son gave you the back talk of the century, you stayed calm and collected while adding 10 more push-ups to his already growing number”. She further added that she wished there were more parents like her who isn’t afraid to educate their children the correct way.

According to Molly's post, the woman's son was arguing repeatedly with his mother, disrespecting her, so she quietly took him and his brother to the restroom where she asks the boy to do push-ups. Meanwhile, Molly, the bystander in the restroom captures the photo on her phone and posts it on social media commending the lady’s parenting.

The lady was immensely appreciated by the social media users who left positive reactions on the post. It has been liked by over 64k people on Facebook and has been shared 41k times. “You go, mama! He will grow up to be a respectful man”, wrote a user. “My response would have been: "Oh, you think these floors are disgusting? Prison floors are much worse, son, and that's where you'll be heading if you don't learn to act right and have respect”, wrote another user acknowledging the woman’s parenting.

“Absolutely love parents who teach their children Respect, boundaries and consequences”, wrote a third. “Good for you mommy, kids have no respect these days, if you try to discipline, everyone is yelling child abuse, keep up the good work”, said a concerned woman appreciating the move.

The users on Facebook also took a hilarious stance on the whole incident. " If been doing those push-ups at home wouldn't be doing them in a public restroom", said a user jokingly. "Those boys are getting that slipper when they get home too", mocked another one. "Love how she’s holding the other kid", laughed the third user. 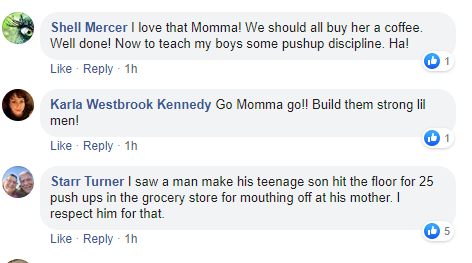 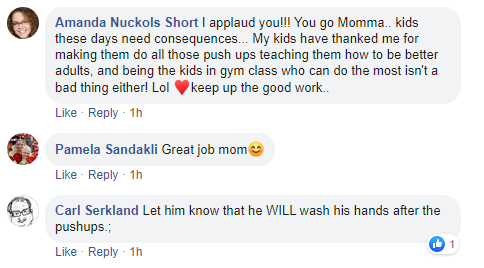 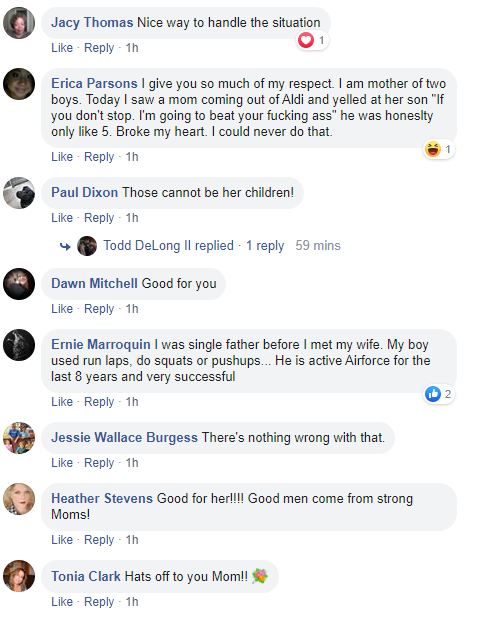