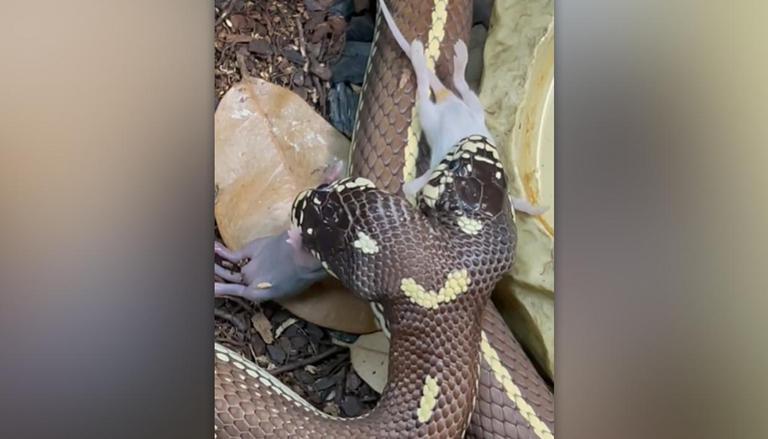 
One can easily find a lot of videos showing the best captures of reptiles on wildlife channels and TV documentaries. They provide a wealth of information about certain species and the risks they face. Snake videos, on the other hand, have a different amount of popularity on the internet. It is not required for videos to have a professional touch to become popular on the internet. Some amateur snake movies and photographs are so fascinating that they leave netizens speechless. A terrifying video that went viral not long ago showed a man fighting for his life when a large snake curled itself around his legs.
A Twitter user named Mariee Pechova shared the 29-second footage.

In another post, there are photographs of a big python in an Uttar Pradesh village that was unable to walk after swallowing a goat. While such serpent scenarios are unusual, spotting a two-headed snake is even rarer. A photographer recently recorded a two-headed snake on camera, as well as filming the animal enjoying a quick snack.

In a video published online by US content maker Brian Barczyk, a snake with two heads swallows two mice simultaneously. Brian Barczyk, who goes by the name 'Snakebytestv' on Instagram, posted a video saying: "Two-headed Ben and Jerry eating. Miss all my snakes and animals, but we will be home soon. Having a blast on this adventure and have so much more to share!!"

The video rapidly went viral, eliciting a variety of responses from Instagram users. A person wrote, "Nothing but result of mutation. There must be a nuclear power plant nearby."  "Don't they have the same stomachs?",  asked a second user.

In December 2020, locals from the Ekarukhi village of Belda forest range in West Bengal had spotted a two-headed snake. But due to the mythological and superstitious beliefs of the villagers, the Forest Department of the state was unable to capture the snake, according to Herpetologist Kaustav Chakraborty.

READ | Viral: Watch a heart-warming video of dog wagging its tail when he comes closer to pops

Two-headed snakes are rare to find but they occur naturally and are not the result of scientific experimentation. The occurrence follows the same process as conjoined twins are born from monozygotic twin embryos. Two-headed animals are usually termed bicephalic or dicephalic.