During the Atlanta Braves, 8-6 walk-off win over the Cincinnati Reds on Wednesday, two ladies engaged in a UFC-style brawl in the stadium's concourse. 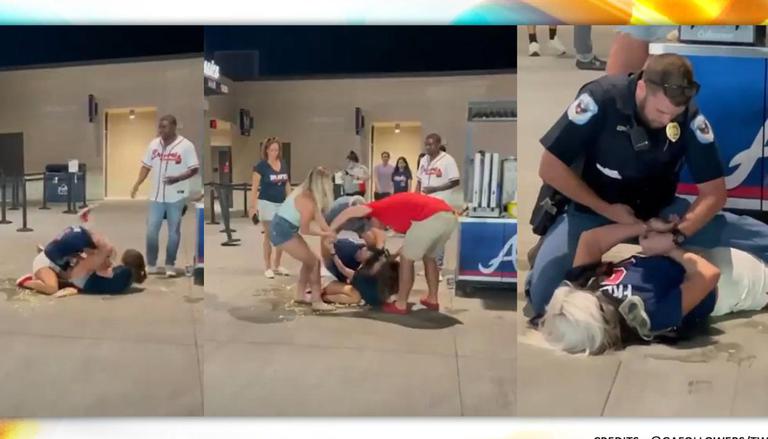 
The return of spectators to stadiums and arenas has mainly been a welcome sight but sometimes fans can be extremely difficult to handle especially if they pick a fight among each other. During the Atlanta Braves, 8-6 walk-off win over the Cincinnati Reds on Wednesday, two ladies engaged in a UFC-style brawl in the stadium's concourse. The two girls wrestled to the ground in the video shared on Twitter by Everything Georgia before one of them attempted a triangle choke on the other fan using her legs.

Braves game got out of control tonight. 😳🥊 pic.twitter.com/vXhvoecLuX

People intervene to break up the fight

Other fans and workers eventually intervened to break up the brawl by pushing the two fans apart. The one supporter wearing a Freddie Freeman shirt, on the other hand, managed to get in a savage stomp before being dragged away. One desperate fan shouted throughout the video to "let go of her," but it plainly did not work as the two continued to fight. Many Twitter users sought to criticise the fan's UFC abilities, eliciting some unappreciative responses.

Since it was posted at 10 pm Friday night, the video has been viewed over 655.6K times, and viewers haven't been short on quips in the comments.

SO close to locking her in the Hell’s Gate hold 😭😭😭 pic.twitter.com/Seap2ZwBJm

One Twitter user wrote, "did… did she shoot her shot on a triangle and accidentally almost slip a gogoplatta? If she’d let go of the hair she could have strangled home girl with her shin."

They built the new stadium in the White Flight part of Atlanta to avoid the “problems” of downtown Atlanta.

That’s what I thought. Girl on bottom looks like she has some training keeping her in her guard and controlling her by her hair.

Early stoppage. Girl on bottom still had a chance of getting the submission.

"Girl on the bottom must be a white belt.. showing some semblance of a guard and a half-a–ed armbar attempt. Assuming it wasn’t a legit takedown on the way down, she wins by an advantage," commented another. "You only see one girl getting arrested and I’m pretty sure it’s cuz of this face kick when they were getting pulled apart. Girl on the bottom was held back and defenceless, definitely against the street fight rules," third comment in Twitter.

The origin of the fight is unknown

A police officer detained one of the fans towards the end of the video. As of now, It's unknown what sparked the brawl or whether the other fan engaged in the fight was also arrested.